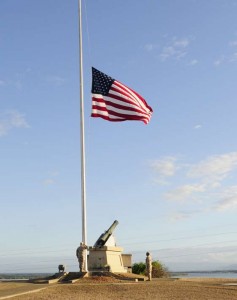 Flag and Cannon at Guantanamo at half staff
Sstaff, Courtesy of Wikimedia Commons

In museum representations of contested periods of US history, narratives are often based on rigid notions of who constitutes the victim and the perpetrator.  Examples include West As America’s revisionist interpretations of frontier art which implicated artists in the violence of westward expansion; Enola Gay’s highly critical depiction of the US and the atom bomb in commemoration of the 50th anniversary of the end of World War II; and The Price of Freedom’s laudatory portrayal of US foreign policy. In each case, museum staff assumed either strongly pro-or anti-imperialist positions, resulting in criticism and protest from groups who felt the details presented were biased, misleading, or inaccurate.

These exhibits largely addressed moments in US history long after they had occurred.  But current projects like the National September 11 Memorial Museum have also incited debates about representation, raising questions about whose version of history should be “official” in the wake of collective trauma. How can we prevent public efforts to memorialize from unreflectively glorifying Americans and demonizing Muslims? And, on the other hand, how can we ensure that impassioned critiques of US foreign policy remain sensitive and mindful of the fact that nearly 3,000 innocent civilians did die on 9/11, and that young Americans continue to die abroad?

I believe the Guantánamo Public Memory Project poses a critical opportunity in relation to these questions. Through its collaborative exhibit panel production, with students from all over the country sharing a multitude of perspectives with one another, it can provide a much-needed alternative to oversimplified and mythological representations of US history.

For one, by creating a space in which to illuminate stories of suffering and injustice while simultaneously discussing moments of expression and resistance, the Project can remind us that even history’s most silenced victim groups also deserve to be remembered as individuals with agency. Fleeing oppressive conditions in their countries, thousands of Cuban and Haitian refugees risked their lives at sea only to arrive at Guantánamo, where they were forced to live in overcrowded and unsanitary camps, with no legal rights and with great uncertainty about their futures. But many created highly political art out of scraps of metal and debris; groups of refugees resorted to protests and hunger strikes.

At the same time, participating with the Project has helped me see that it is important to avoid conflating the intentions of individuals who have been stationed at GTMO with those of the government. In relating instances of discrimination and violence towards refugees or detainees to broader discussions of American imperialism, we also need to ask questions about how this behavior has been systematically encouraged and authorized.

Representing Guantánamo is not a simple task, in part because it has meant, and continues to mean, very different things for many people. It may therefore be impossible to create an exhibit that fully satisfies every viewer or participant. But this is not the Project’s ultimate goal: American society has much more to gain from creating a space for dialogue and constructive debate about this complex and little-understood place.