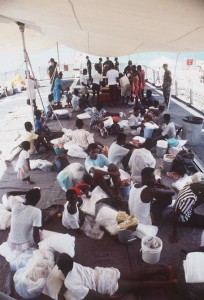 This week, three members of congress submitted a request to deliver a presentation to the Senate arguing that the U.S. government should broaden its powers to indefinitely detain people believed to be a threat to national security. The move seems to indicate that indefinite detention is becoming increasingly acceptable, and that Guantánamo’s exceptional legal status will continue to be used to detain people without legal protections in the future.

On December 29 1994 State Department officials released a statement to the more than 4,400 Haitian refugees being detained at Guantánamo to inform them that they needed to return to Haiti by January 5 1995. The repatriation program promised $80 and a job in Haiti for two to four months for individuals who agreed to leave the base by the deadline. The statement added, “Those of you who do not take advantage of these programs will be required to return to Haiti but these enhanced benefits will not be available after that date.”

Most of the Haitian men, women, and children who were being held at Guantánamo fled political violence in Haiti and were taken to the U.S. naval station after being intercepted on the high seas. At Guantánamo they spent years living in tent cities, without legal protections, while their futures were debated.

The Guantánamo Public Memory Project is collecting and disseminating the stories of people who worked or were detained at Guantánamo during this period to shed light on questions about detention and human rights that still endure today.