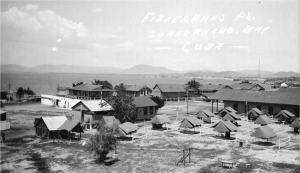 The U.S. naval station on Guantánamo Bay in Cuba. Image courtesy of Library of Congress.

“Guantánamo” has become an international symbol of the United States’ War on Terror and a lightning rod for debates about torture, detention, national security, and human rights. But the US naval station at Guantánamo Bay – also known by its military acronym “GTMO” or its nickname, “Gitmo” – was part of American politics and policy for a century before 9-11.  And it has been “closed” several times, only to be put to new use. How was GTMO used before? How does that shape what could — and should — happen next?

From 2011-12, students at 11 universities around the country asked:  what can GTMO’s history tell us about what’s happening now – there, and here at home?  They dug through historical archives; talked to people who worked there, lived there, were detained there, or advocated for those who were; and explored how GTMO relates to issues, people, and places in their own community.

The result is a nationally-traveling public exhibit on Guantánamo that is coming to Rutgers University, New Brunswick on February 19, 2013. Please see our schedule of events to see the exhibit and join the national dialogue!

If you are teaching a course and are interested in visiting the exhibit, please email Andy Urban at aturban@rci.rutgers.edu to schedule a guided tour.

Poetic Justice: The Shades of Guantánamo

Organized and performed by Rutgers undergraduate students, “Poetic Justice” uses art, poetry, oral histories, and legal testimony from GTMO to highlight the voices of detainees at the base.

Confirmed speakers for the conference include:

The full conference schedule will be available in February 2013.

Office for Academic and Public Partnerships in the Arts and Humanities

Office of the Dean of Humanities

Office of the Executive Vice President for Academic Affairs