March 4, 2013: Defense attorneys representing detainees at Guantánamo have discovered audio monitoring and recording units in locations they have discussed confidential aspects of their case with their clients. The discovery comes amid increasing debate about the legality and legitimacy of military trials at Guantánamo.

March 10, 2002: Just months after the first detainees arrive at Camp X-Ray from Afghanistan and Pakistan under the War on Terror, a Senior Defense Department official declares: “Not one of the detainees has shown he is entitled to prisoner-of-war status.” The statement was one of the Defense Department’s earliest attempts to justify the Bush Administration’s decision to deny inmates protections mandated for prisoners of war by the Geneva Conventions. 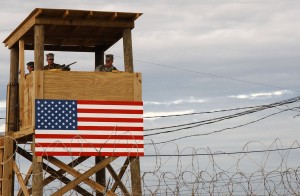