April 17, 2013: After a guard force raided an inmate communal area in Camp 6 this past Saturday, the military released a statement saying the response was necessary for the safety of the detainees. U.S. officials claimed that since the beginning of the hunger strike on February 6, there have been two suicide attempts and inmates’ recent efforts to block 147 of the 160 cameras in the facility could have been to conceal more suicide attempts. 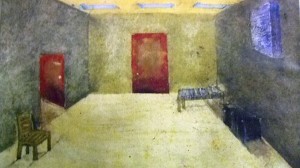 A pastel drawing completed by an inmate at the Guantánamo Bay detention facility. Courtesy Chris Sims.

April 17, 1961: The U.S. initiated a failed invasion of Cuba at the Bay of Pigs. The plan included a staged “attack” on Guantánamo Bay to justify a full U.S. military response.