April 28th, 2013: For the second time during his presidency, Barack Obama declares he will attempt to “close Guantánamo.” “The notion that we’re going to keep 100 individuals in no man’s land in perpetuity makes no sense,” he said. He later added: “All of us should reflect on why exactly are we doing this? Why are we doing this?” 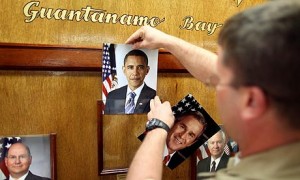 President Obama is given charge of Guantánamo. 2008. AP Images.

May 1, 1995: In response to the Cuban refugee crisis at Guantánamo, the United States revises its migration policy for Cuban nationals that are interdicted at sea or that escape to GTMO. The new law mandates Cuban migrants be returned to Cuba.