A poll recently conducted by The Huffington Post and YouGov suggests that the American public is deeply divided on what to do about Guantánamo. The poll, which can be seen here, asked people where they stood on military tribunals, the U.S. possession of Cuban land, and the inmate population. 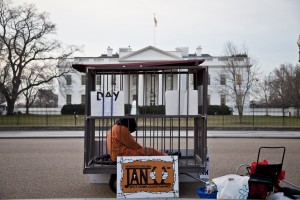 A 96-hour Guantánamo cell vigil in front of the White House protests the ten year anniversary of the detention center. Courtesy Justin Norman.

The Guantánamo Public Memory Project seeks to shed light on this debate, and the broader issues that GTMO has come to represent, by grounding dialogue in rigorous historical scholarship from multiple perspectives.

In addition to regularly visiting our blog, we hope everyone will take the time to share their perspectives and “Shape the Debate” on Guantánamo at our Participate page. We also encourage you to see our traveling exhibit, and to share your take on this history with your mobile device through SMS voting. 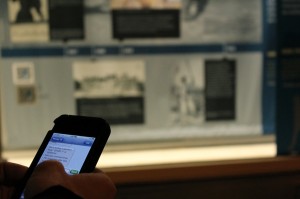 A visitor to the traveling exhibit of the Guantánamo Public Memory Project shares his perspective through SMS voting. Courtesy Picture Projects.