May 16, 2013:  One hundred inmates out of the 166 at Guantánamo are protesting their detention by refusing food, according to a U.S. military statement on Wednesday. It also reported that 30 inmates are regularly force fed. 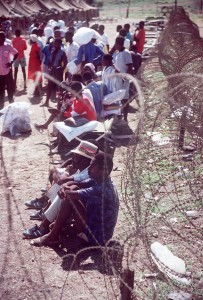 Haitian sea migrants have been held in detention at Guantanamo Bay, Cuba on two occasions – in 1991-1992 and in 1994. Haitians seated in the open await processing in a tent city at the U.S. Naval Base at Guantánamo Bay, Cuba in 1991. USCG photo by PA3 Eric Eggen

May 13, 1993: Haitian refugees detained at Guantánamo because they tested H.I.V. positive began their second prolonged hunger strike. 158 adults at a makeshift confinement camp on the base began the strike after their calls for release were ignored. Federal immigration policy barred anyone carrying the virus from entering the United States.