May 29, 2013: Navi Pillay, Chief of Human Rights at the United Nations, lambasted U.S. detention practices at Guantánamo, declaring that the site “has become an ideal recruitment tool for terrorists.” 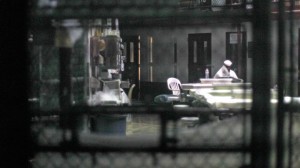 May 28, 2006: The Department of Defense acknowledged that 75 detainees were participating in a prolonged hunger strike. The protest began amid bleak prospects that the Bush administration would initiate fair trials for the uncharged inmates.