Opening Night of UCR ARTSblock’s “Geographies of Detention: From Guantánamo to the Golden Gulag” 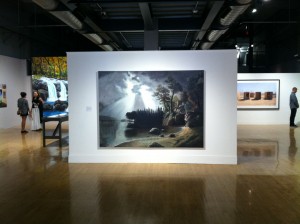 An idyllic California landscape painting with a prison nestled in the distance greets the visitors as they enter the California Museum of Photography in the fourth stop of the Guantánamo Public Memory Project.  The traveling exhibition was curated by students from eleven universities across the country to raise contemporary issues, such as incarceration, national security, detainee and refugee rights, and official memory, grounded in the long and contested history of Guantánamo Bay, Cuba.  Each team of students created one piece of the exhibit.  Graduate students in the Public History program at the University of California-Riverside (UCR) titled their portion the “State of Detention,” drawing parallels between the current crisis of detainees at GTMO and overcrowded inmates in California’s prison system, and posed the question: “Is the US sacrificing civil liberties to secure its safety?”  Each university places the Project’s exhibit in its own context.  UCR’s California Museum of Photography is hosting it as part of, “Geographies of Detention: From Guantánamo to the Golden Gulag.”  The show combines paintings by Sandow Birk, photographs by Alyse Emdur and Richard Ross, and films by Ashley Hunt, the Los Angeles Poverty Department (LAPD), and Setsu Shigematsu alongside the Guantánamo Public Memory Project to offer a multifaceted regional investigation into mass incarceration and the prison industrial complex that carry larger national implications.

While I had studied the prison industrial complex as a student at NYU and its connection to the Guantánamo Public Memory Project, I was struck to learn about the extent of the crisis in California.  UCR professors and exhibition curators Catherine Gudis and Molly McGarry explain, “At upwards of $10 billion per year, California ranks first in the nation in prison spending.  The suicide rate in California’s overcrowded prisons is nearly twice the national average, and one inmate dies every eight days from inadequate medical care.”  Outside of the museum, the theater group LAPD’s (Los Angeles Poverty Department) production, 184 Californians Read the 184-page U.S. 9th Circuit Court of Appeals Plata-Coleman Decision on Overcrowding in California State Prisons (2010-11), plays on continuous loop inviting passersby to consider the U.S. 9th Circuit Court’s recent decision that the current overcrowding in the states’ 33 prisons amounts to “cruel and unusual punishment.”  Inside the museum, UCR undergraduate students also highlighted the state of prison overcrowding, contributing projections of aerial images of California’s prisons, their annual operating cost, their design capacity, and current population, as well as a map of California that marked the chronological explosion of prison construction over the past few decades. 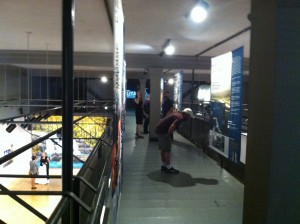 At the panel discussion accompanying the opening of the exhibit, artists involved in the exhibition further invited viewers to reflect on the state of the California prison system.  Sandow Birk noted that his original inspiration for painting landscapes of each California state prison came from studying traditionally idealized, epic portrayals of California’s landscapes. His paintings instead juxtapose these idealized landscapes with portraits of California’s state prisons, problematizing a traditional association of the Western landscapes of California with hope and freedom.  Alyse Emdur’s photographs explore the photographs that inmates are allowed to take for their loved ones in front of painted mural backdrops, often painted by the prisoners themselves. Her work highlights the humanity of prison inmates, so often overlooked by mass media depictions of criminals.  Kevin Michael Key discussed some of the reasons he began working with Critical Resistance and its effort to abolish the prison industrial complex as well as with the LAPD theater group on skid row in Los Angeles, saying, “California imprisons more of its population than any other place on earth.”  Setsu Shigematsu described her venture from academia into film in her documentary Visions of Abolition (2011), which offers a critical commentary on the prison industrial complex through the voices of scholars and women inmates.

By the time I arrived again at the topic of Guantánamo Bay, Cuba in the second floor of the exhibition, I felt as though Guantánamo had a new relevance.  One of the challenges of the Project has been to try to make the history of Guantánamo Bay “hit home.” The base’s distance geographically often keeps it “out of sight, out of mind.”  However, by directly placing the exhibition in dialogue with a highly debated regional and local issue, the students and professors at UCR’s exhibition readied viewers to better understand both detention at GTMO and incarceration in the US, and ultimately facilitated greater empathy with detained persons in each case.