June 12, 2013: A group of leading physicians published a charge to doctors working at Guantánamo to refuse participation in the U.S. military’s force-feeding program. In addition to arguing that the practice “unambiguously violates medical ethics,” they also labeled the detention center a “medical ethics free zone.” 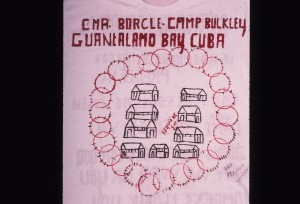 A T-shirt made at Guantánamo portrays Camp Bulkley, a detainment center for refugees. Courtesy Carol Halebian.

June 12, 1993: Haitian refugees being held at Guantánamo for testing H.I.V. positive were in the process of being transfered to medical facilities in the United States following a federal court order that ruled their detention “a tragedy of immense proportions.”