Why Guantánamo Bothers Me 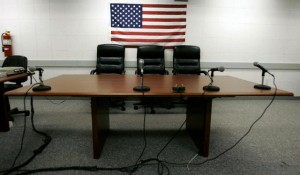 In 2009 I published a scholarly history of the Guantánamo naval base entitled Guantánamo USA: The Untold History of America’s Cuban Outpost.   It took six years of research and writing to produce and can be found in college and university libraries across the United States.  Yet today I confess that I do not understand why our political leaders are unable or unwilling to close the Gitmo prison where prisoners are now being force-fed to prevent their dying of starvation.  In my mind, Gitmo long ago ceased to be a detention center or even the controversial U.S. naval base at the southeastern tip of Cuba.  Instead, for me, as a patriotic American, Gitmo has become a worldwide symbol of American paranoia as well as an official determination to persist in systematic persecution, but not prosecution of those accused of being terrorists.  It not only challenges, it negates our beliefs in liberty, justice, and legal procedures—the principles on which our nation is founded.

I am not a “bleeding-heart” liberal.  I served for 32 years as an overt official of the Central Intelligence Agency, with much of that time focused on Latin America. What happened on 9/11 should never be forgotten or forgiven. Terrorists connected in any way with those multiple atrocities merited incarceration and interrogation. But Gitmo quickly became a catch-all detention center for hardened terrorists and also hapless individuals who happened to be in the wrong place at the wrong time.  Consider, for example, Adnan Latif, who died on September 8, 2012, after spending 4,000 days and nights in jail, but was never accused of or charged with committing any crime.  Latif, a citizen of Yemen, reportedly was seeking medical treatment for his badly fractured skull, when he was apprehended by Pakistani police near the Afghan border and turned over to U.S. military authorities.  When his appeal for a habeas corpus petition was denied, Latif said “I am a prisoner of death.”  We do not know if Latif died of natural causes or committed suicide.

The failure of the U.S. government to address the Latif case in a public forum exemplifies what bothers me about Guantánamo— a combination of official silence and sweeping pronouncements, but no public debate.  It may have begun in 2002 when former Secretary of Defense Rumsfeld justified his edict to turn Guantánamo into a detention/interrogation center by quipping “it was the least worst place,” without explaining how or why he made that decision.  Since then senior officials have tried to justify arbitrary actions and decisions concerning Guantánamo with meaningless comments that preclude further discussion or debate.  Former CIA director George Tenant eluded questions about waterboarding in a CBS 60 Minute interview by adamantly stating “we don’t torture people.”  What, I would ask, constitutes torture?  Is indefinite prison detention torture? Is force-feeding torture? Recently, House Speaker Boehner said “I wouldn’t close Gitmo if you put a gun to my head.”  That’s is certainly a emotional outburst from a top lawmaker, but how would he validate it in open debate?

As citizens and taxpayers, we deserve a discussion of other questions, such as: How much does Gitmo cost per year?  What unique functions does Gitmo fulfill that couldn’t be provided elsewhere at less expense?  What do we risk or lose by transferring prisoners from Gitmo to U.S. prisons and trying them in military tribunal?  Which of our allies have distanced themselves from the United States as a result of Gitmo and what has it cost us in terms of international goodwill?  Most important, to what extent do American citizens like me now feel ashamed of how our nation has behaved at Guantánamo?