What Contradictions Allow Detention at GTMO? 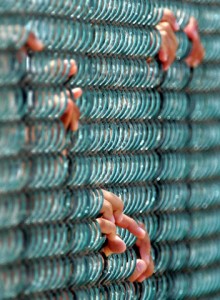 Men detained at Guantánamo under the War on Terror. Courtesy Getty Image.

We have talked about this dream since you were a young man . . . how the American Dream is so much more than a good night’s sleep. But I cannot sleep anymore. Every morning, an alarm clock blares those three letters throughout my conscience. This is so much more than a virus. This is an acronym that will plague me for the rest of my days. –Dennis Sholler, “Voices from Guantánamo.”

If there is something to be said about our country’s roots, it is that they are buried far too deeply.

The United States of America is a country constructed out of revolution. Storming elementary school textbooks and Fourth-of-July-themed word search puzzles, we speak of our democracy and our fervor for independence like we speak of our own children: proud, even when it’s not warranted.

How far are we from that 18th century sapling of a nation? Chronologically, we are some 200 years stronger, with roots extended far beneath the soil. What pivotal footsteps we have made since we rang the Liberty Bell from the tower of Independence Hall? Some would say that we have excelled; we have seen movements for civil rights, women’s suffrage, and, more recently, marriage equality.

The more things change, however, the more they stay the same.

Upon the 1991 Haitian coup d’état – a movement that saw the end of Jean-Bertrand Aristide’s presidency in Haiti – thousands of displaced Haitians fled for the United States. Most were intercepted in International Waters and escorted to Guantánamo Bay.

They were refugees. They were freedom riders. They sought the same political freedom outlined and promised by United States provisions. Specifically, the United States Refugee Act of 1980 defined refugees by the following:

They were prisoners of contradiction.

Starting in 1991, Haitians were detained at the United States Naval Base at Guantánamo Bay. Tent cities were constructed to house these refugees. One noteworthy destination for many incoming Haitians was Camp Bulkeley, a detention camp designed to house HIV-positive Haitians among others. Among many evaluations, one Federal Judge called Camp Bulkeley a “HIV prison camp.” Among detainee mistreatment (which, frankly, speaks for itself), United States District Court Judge Sterling Johnson Jr. declared the camp unconstitutional on June 8th, 1993; the last Haitian refugees would leave the camp in 1995.

In a nation characterized by overwhelming spurts of patriotism, one must wonder what the United States has deemed to be the cost of freedom. Among the political and socioeconomic growth that has shaped the United States in over 200 years, have we closed our doors to those who seek the same political freedom upon which this nation was founded?

At the outermost tips of our roots, “freedom” is defined as the quality or state of being free, as the absence of necessity, coercion, or constraint in choice or action. It is liberation from slavery, restraint, or the power of another.

We remain prisoners of contradiction with roots extended too deeply to fully understand the origins from which we have grown.

What I do know is that we lack clarity. With all of our roots tucked deeply beneath the soil – our ideas of liberty clinging to textbook definitions – we continually discuss freedom by the ways in which we have challenged it. Perhaps our notions require replanting – to yank our history from the dirt and evaluate just where the branching of our own definitions of “freedom” began.

Dennis Sholler is an undergraduate student at Rutgers University in New Jersey.

Rutgers University is participating in the Guantánamo Public Memory Project‘s National Dialogue and Traveling Exhibit. Traveling to 12 sites (and counting) across the country through at least 2015, the exhibit will explore GTMO’s history from U.S. occupation in 1898 to today’s debates and visions for its future. The exhibit is being developed through a unique collaboration among a growing number of universities as a dialogue among their students, communities, and people with first-hand experience at GTMO.