July 8, 2013: A federal judge called on President Obama to address force-feeding at Guantánamo in the face of mounting allegations that the practice violates international norms, as well as legal bids from detainees seeking to block the practice during the Ramadan holiday. 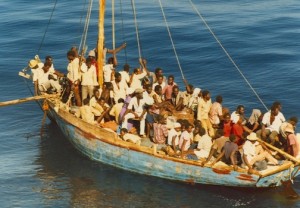 July 8, 1994: By noon Coast Guard cutters delivered 862 Haitians to Guantánamo after the political refugees were intercepted on the high seas, bringing the total number of refugees detained there to approximately 16,000 since mid-June of the same year.

Hello Mr. Rojas. I am cuban rafter who spent a year in Guantamo Bay in 1994. I’d like to find a way to contact some of my mates. I am a lost rafter in Iowa.