Guantanamo Circus: A Journey to the Other Side 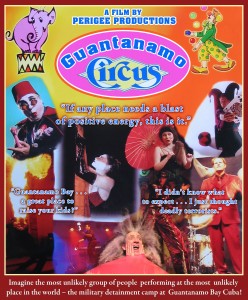 Like most people, I’d heard of Guantanamo – the home of the most notorious prison in the world.  But I was intrigued when told a circus had gone to a side of the base almost no one has ever reported on – the side where military families, civilian contractors, support staff, and more than a thousand children live, work, go to school and play.

They asked me to co-produce a documentary about what this troupe of singers, dancers, jugglers, magicians, aerialists and musicians discovered on their journey to this hidden world.

Upon landing, my producing partner, singer Christina Linhardt, found things aren’t going to be quite what she’d assumed when a soldier tells her – GTMO, “it’s a great place to raise your kids.”

They were immediately struck by the contrasts on this remote island hemmed in by the translucent waters of the Caribbean on one side and a minefield and concertina wire on the other.

From the balconies of their hotel they saw a yacht harbor teeming with sailboats and kayakers and the prison looming on the hill.  But their part of Club Fed didn’t look so bad. They had been given a van and decided to take an unescorted tour of the island.

There was a supermarket, bowling alley, gym, Post Office, fast food restaurants, a dive shop and a neighborhood of modern suburban style homes that could be found anywhere in the United States.

It was like entering a giant time capsule “a ‘Twilight Zone’s’ 1950s surreal small town,” Linhardt explains in her interview.

Luckily a couple had taken video cameras with them.  Of course, they ignored all the “No Photos” signs and captured the essence of their experience.

As the tour continued they found countless iguanas lounging in the middle of the road.  These creatures are protected – backed up by a heavy fine – but some of the humans “behind the wire” had been mistreated and denied a trial.  They also found a display of abandoned rickety boats used by desperate Cubans and Haitians who risked dying to get in to GTMO while most can’t get out.

The circus does two shows in the packed “downtown Lyceum” (an open air theater in an outdoor parking lot).  As soon as the music starts the kids storm the stage.  It’s clear the crowd is starving for entertainment. 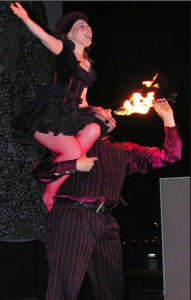 “If any place needs a blast of positive energy, this is it.” Image courtesy Michael Rose.

“Seeing issues through the eyes of the circus is a way to prompt discussions across the political spectrum without polarizing people,” said Linhardt.

Of course, since our guides are clowns, they feel it’s their duty to make people laugh.  And the film uses humor as it explores these controversial subjects.

At screenings of “Guantanamo Circus” we’ve seen people laugh and then after its over they want to know more about GTMO.  “Laughter is the way into the heart, the mind and the soul,” said Linhardt. 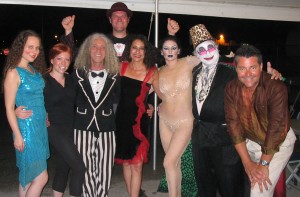 A film by Perigee Productions, completed in March 2013

This 26-minute documentary is now making the festival rounds and is available for screenings.

Learn more about the film on IMDB