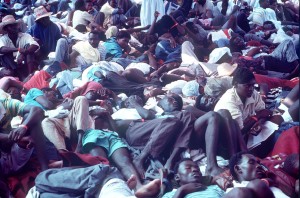 I am not a hypochondriac, but during the SARS outbreak of 2002, I seriously contemplated wearing a mask.  How else could I protect myself from the airborne disease that killed nearly a thousand people in a year-long span?  Ten years earlier, a similar hypochondriac tendency had plagued the United States.  The disease, AIDS; the pathogen, over 200 HIV-positive Haitian refugees imprisoned at Guantánamo Bay.

Thousands of the men, women, and children, who fled Haiti following a military coup in 1991, were intercepted by the United States Coast Guard and transported to the US Naval Base at Guantanamo. The Guantánamo Haitians lived in camps more appropriate for prisoners of war than civilian refugees.  Repatriation claimed many.  Asylum came for next to none. Yet even political asylum did not guarantee that a refugee would be released onto American soil—and definitely not a refugee with HIV. A ruling in the Immigration and Nationality Act barred non-citizens with a “communicable disease of public health significance” from admission into the United States. It is tempting to look back with horror at this legal precedent, but we should not judge the past by the moral standards of today. Knowledge of and treatment for HIV was in its infancy in the early 1990s.  But people believed that when HIV became AIDS, it was an unequivocal death sentence.

Millions of people around the world wore masks to prevent catching SARS in 2002, when only a fraction of people died from that disease compared to the hundreds of thousands of American citizens alone who perished from AIDS between 1988 to 1993.  If a fatal illness was known to contaminate a segment of the population today, it seems realistic that quarantine measures would be taken to prevent that disease from spreading to the general public.  This may sound like the plot line of an apocalyptic, science fiction movie, but it is exactly what happened at Guantánamo in 1991.  The government isolated HIV-positive individuals, even those with legitimate claims to political asylum, in Camp Bulkeley, apart from the remainder of the camp population and hundreds of miles from American soil.  Perhaps the Haitians should have been paroled directly into the United States, but was the moral outrage over Guantánamo a result of the Haitians’ imprisonment or the camp conditions that left men, women, and children susceptible to the elements and the mercy of their disease?  Some AIDS activists feared these kinds of measures would be taken on American soil to HIV-positive Americans.  Or perhaps it was the length of the internment that appalled the AIDS activists, mass media, celebrities, lawyers, and the judge who eventually ordered their release.

No one doubts that what happened to the Haitians at Guantánamo was terrible; an affront to basic human rights; a violation of international refugee law; and perhaps even symptomatic of this country’s racism and aversion to poverty.  But is part of what makes the story terrible the fact that HIV-positive refugees were quarantined or how they were imprisoned? How and where should the line be drawn between human rights and public health?  And if it came to it, would we forgo the mask in order to save a life?