My Haiti: A Blog Reflection of Working on GPMP 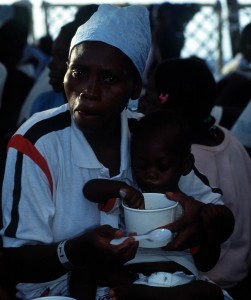 Working on Guantánamo Public Memory Project has opened my eyes to the ways we form biases, often without realizing it. Before GPMP, there existed My Haiti. My knowledge of Haiti was murky throughout school. I was aware of its existence but had no knowledge of its politics or people. My Haiti was the Haiti of the 2010 earthquakes, a disaster-stricken land of children crying as celebrities pleaded with us to donate to their relief effort. My Haiti was helped by My America, a country filled with honest people who volunteered to go to Haiti or gave food and money to relieve Haitian suffering. I saw Red Cross Blood Donation vans daily at my school and my community, with people lining up to give help. My Haiti was hurt and the America I knew rushed to help them. Before GPMP, Guantánamo Bay had nothing to do with Haiti. Guantanamo was the result of President George W. Bush’s response to the 9/11 attacks, not a base that existed since before President Ronald Reagan who created the policy of exclusion that would later define Haitian relations.

Clearly, My Haiti was not the Haiti of the Guantánamo Public Memory Project, and My America was not the America that locked up thousands of innocents and delayed justice for decades. How did I come to construct this uncomplicated, simple image of Haiti?

This project has made me think about the way we conceive images of other cultures or nations, and ourselves. How is it possible, that after 17 years in school, I had to wait until 2013 to find out about this tragedy in American policy and the extent of human suffering it caused? Who taught me to praise the Statue of Liberty, to believe the poem at her feet: “Give me your tired, your poor, Your huddled masses yearning to breathe free, The wretched refuse of your teeming shore.” All the while, I was ignorant of those homeless, wretched masses already on our shores, surrounded by our barbed wire and guns. Which media station gave me the shortened history of Guantanamo Bay, focusing on terrorists and not the tear-streaked children twenty years ago? Why is it always easier to give bulletin points about current events, as though the Haitians are without any history leading to their arrival on our shores?

Haiti became personified when I interviewed Wadson Michele, a young man who in 1991, placed over 100 Haitian minors who fled without their families, into homes. Discussing these children made his voice thick with emotion, and at times, he refused to answer my questions, fearing that the many emotions still hiding within his memory would flood forth…this Haiti was an arrow to my heart. I still want America to be the America full of volunteers that rushed to help Haiti, although now I wonder if our aid was guided by twenty years of guilt. Our perceptions of our country, our people and ourselves usually develop without conscious intentions. They are constantly being challenged by new information, and often times, that information is not pleasant. If we can acknowledge our sins, as a nation and as a person, without letting them define us, we can be ready so when the next tragedy occurs (and one always does) we, as individuals, can become a part of the solution.

One Comment to: My Haiti: A Blog Reflection of Working on GPMP

Very nice job. It sounds like you came from a family background of socially aware people who embedded a sense of morality. Keep your value priorities and good luck with your MA