Reluctance to Remember the Past: Children in Guantánamo 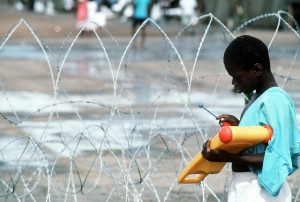 A Haitian refugee child plays with a donated toy beside a fence marking the boundary at Camp McCalla, site of a humanitarian relief center for Haitians fleeing political and economic upheaval in their homeland.

While uncovering the experience of Haitian unaccompanied minors held at Guantánamo Bay during the refugee crisis in the early 1990s, I found it difficult to face the unresolved legacy that the detention left these children. Many of refugee children suffered a range of psychological issues as a result of the traumas of their ordeal. Consequently, it was difficult for them to recall experiences from the naval base, as their memories were painful and unresolved. Many refused to do so, as Haitian psychotherapist Wadson Michel recounts in his interview. Describing his experiences with Haitian minors entering the United States, he vividly recounts the difficulties he encountered while helping to place them in foster care. Working hard to connect with them, Michel found Haitian children were highly reluctant to trust anyone as a result of their treatment in the camps. Even now, decades later, psychological scars continue to troubled many of them. Trying to form an understanding of the experiences of these children, an account that has been mostly undocumented, becomes considerably more difficult given their understandable reluctance to describe this past.

In addition to the violent trauma they experienced while fleeing their home, Haitian child refugees faced destabilizing uncertainty in Guantánamo, waiting fearfully while politicians and officials with whom they had no contact debated their right to asylum. For children with no families, this wait would affect the rest of their lives, leaving them distrustful of a system that had isolated them in an unfamiliar and inhospitable environment for years. The emotional burden of this experience compounds the difficulty inherent in documenting the refugees’ undocumented stories, but also underscores the necessity of bringing these stories to light. The task at hand isn’t simply uncovering a story that no one has yet heard. It is also coaxing out a story no one wants to tell, because the telling is uncomfortable and painful. We need to examine the causes of the suffering in these memories. Learning why the recollection of Guantánamo is painful for many Haitians is part of the history of Guantánamo. A comprehensive history of the place is incomplete without it.

In his interview, Wadson Michel notes his profound feeling of inadequacy, developed after spending only a single summer working with these children. The lack of support available to address psychological issues exacerbated the lasting impact of enduring violence and instability. These children were wronged, and then they were never sufficiently compensated or assisted. A potential step towards healing and closure for those whose lives were disrupted in Guantanamo can be initiated here, in the GPMP by openly acknowledging what happened, who was involved, and how it was wrong. Most importantly, this can be done from the perspectives of those who were actually there, previously unexpressed within the context of Guantánamo’s history. The Haitians had little control over conditions in Guantánamo, and the decision to share their experiences and tell their own stories, however difficult this is, belatedly restores a small measure of that control.