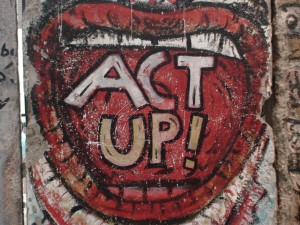 By Rory Finneren from Washington, DC (Act Up! Uploaded by Gary Dee) [CC-BY-2.0], via Wikimedia Commons

In the early 1990s, AIDS was still formidable, frightening, and under-researched. The United States government and the Center for Disease Control maintained that being Haitian was a risk factor for HIV/AIDS. This policy was based upon racism and fear, not scientific evidence, but it influenced public perceptions of both the Haitian community and HIV/AIDS. And it led to the indefinite detention of HIV positive Haitians at Guantánamo Bay.

Though a wide variety of groups were appalled by the government’s decision to hold the Haitians, these groups understood—and reacted to—this situation in very different ways. While interviewing Professor Mike Wishnie, a lawyer working on behalf of the Haitian Centers Council and with Haitians throughout the Haitian Refugee Crisis of the early 1990s, I was struck by his candid remarks regarding the ideological polarization between gay activists in Act Up and Haitian advocacy groups in New York City. Although the groups would ultimately work together to successfully protest the indefinite detention at Guantánamo Bay, Act Up and the Haitian advocacy groups were initially hostile towards each other. Act Up, a gay rights organization composed primarily of white males, held vastly different ideas about what it meant for the Haitian refugees detained at Guantánamo Bay to be gay than Haitian advocacy groups.

While some Haitian advocacy groups, especially those based around religion, opposed homosexuality as a sin, the majority were reluctant to embrace their fellow countrymen and women because they worried that these few hundred HIV-positive detainees would further erode the already negative American and international perceptions of Haitians.This attitude could not have been further from Act Up’s stance. Act Up embraced homosexuality and argued that AIDS was a medical emergency, not a moral punishment. These different outlooks resulted in severe tension. Moreover, Haitian advocacy groups that worked with Act Up were skeptical of the results of military testing for HIV. This distrust irritated Act Up’s members, who saw Haitian advocates’ desire to distance themselves from HIV/AIDS as a betrayal. After facilitating meetings with both groups, Wishnie eventually succeeded in uniting Act Up and Haitian advocacy groups to effectively protest and educate. Still, Haitian advocates’ hesitancy to admit there were Haitians with HIV/AIDS and Act Up’s initial disinterest in the crisis proved difficult to forget.

Groups that advocate for unpopular or minority causes are often seen as interchangeable, yet as this situation demonstrated, advocacy groups and their causes can be wholly incompatible if there is not a third party mediator or an ability for the groups to compromise in order to accomplish a greater goal. Although both groups wanted the HIV positive Haitians detained at Guantanamo to be released, their reasons were fundamentally different. Haitian advocacy groups simply wanted the Haitians emancipated from the camps. Act Up members were more alarmed at the fact that people, regardless of race or nationality, were being held in concentration camps because they were HIV positive. The groups’ ideological differences made joint effort almost impossible. Without Professor Wishnie and compromises made by both groups, Act Up and the Haitian advocacy groups would not succeeded in raising awareness and educating the American public about the Haitian Refugee Crisis.

The minority is frequently characterized as a single unit with a unified purpose and belief system, but this characterization is a fallacy. In reality, minority opinions and groups that advocate for minority causes are politically, socially, and culturally diverse, and are not fighting for the same purposes and goals. Because these groups advocate for minority causes, they are forced to cooperate and negotiate with each other, despite potentially deep ideological differences in order to achieve their goals. In the case of Act Up and the Haitian advocacy groups, the choice to unify despite opposing viewpoints helped make the Haitian Refugee Crisis, and specifically the HIV positive Haitians at Guantánamo, a more visible and pertinent issue in the United States.