August 30, 2014: The U.S. Coast Guard announced that it had repatriated 24 Haitian and 62 Cuban migrants that had been attempting to reach Florida by boat. Many of these had attempted to reach the U.S. on unseaworthy ‘rafts.’ 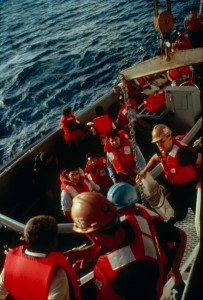 September 9, 1994: In the summer of 1994 the U.S. saw a massive increase in Cuban migrants attempting to reach the U.S. by homemade raft. In August the Clinton government announced that all Cuban interdicted at sea would be transferred to Guantánamo Bay. On September 9 the government agreed to allow at least 20,000 Cuban migrants into the U.S. annually, thus relieving some of the pressure that the interdictions had placed on the base at Guantánamo.