In March, for the first time, GPMP visited GTMO. Since the project began we’ve spoken to a diverse range of individuals about their memories of Guantánamo. Yet we’ve been unable to speak to them at the site itself – until now. As representatives of GPMP, a dozen graduate students from the University of South Carolina visited the Naval Base during their spring break and spoke to current base residents.

Led by USC public history professor Allison Marsh, the students gathered oral histories from members of the military, their dependents, civilian contractors, and Jamaican and Filipino nationals who also work at the naval base.

On their visit the USC students specifically studied the lighthouse at Guantánamo Bay and it is revealing that we recently uploaded to our archive photographs from Sybil McClaugherty who lived at the lighthouse for two years in the late 1960s.

The students also brought the GPMP exhibition to be displayed at Guantánamo while they were there and collected artifacts and memorabilia that will be put on display when the exhibit moves to the USC McKissick museum in September.

In other news GPMP are happy to announce that copies of The Guantanamo Bay Gazette from 1948 to 2005 have arrived at Florida International University and are due to be digitized. Copies of the Gazette from 2006 are already available on the Digital Library of the Caribbean (Dloc) and the older copies will be an invaluable addition. The digital archives of GPMP can also be found on dloc and we urge you all to check them out. 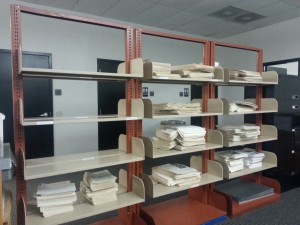 Fresh out of GTMO: Copies of the Guantanamo Bay Gazette