July 16th 2015:  Cuban President Raul Castro addressed the nation’s National Assembly in a speech calling for a new relationship with the United States. President Castro called for an end to the animosity between the two nations, dating back to the end of the Cuban revolution in 1959. This speech is part of the recent on-going effort to normalize US-Cuba relations. While the two nations have made progress in this process (political prisoners have been exchanged, plans have been announced to establish of embays and the U.S has removed Cuba from the list of countries that sponsor terrorism) there still remain major steps towards fully normalizing relations. One of the major obstacles left is congress, which President  Obama needs approval from to lift the embargo of Cuba. Many members of congress such as Senator Marco Rubio (R-FL) have promised to vote against lifting the embargo.  The other obstacle is GTMO, which Cuba has demanded be returned to as part of normalizing relations. Despite Cuba’s demands, the United States has said that the  issue of return is not on the agenda. 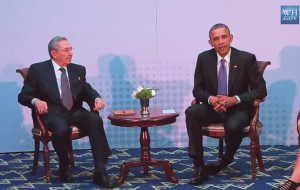 July 13th 1994:  A wooden vessel carrying around 72 Cubans fleeing the country sunk near the coast of Cuba. 41 of the passengers drowned in the horrific incident. The cause of the sinking has been disputed. The Cuban government has claimed that the boat, which had been stolen from the Cuban state sunk as a result of an accident in the Cuban Coast Guard’s attempt to follow and reclaim the boat. Other institutions, such as Amnesty International , the UN Rapporteur on Cuba and the Inter-American Commission on Human Rights have claimed that the Cuban coast guard intentionally sunk the ship by ramming the boat with larger boats and hosing down the passengers to make them fall off the boat. This event has been referred to by many, particularly within the Cuban-American community as the “Tugboat Massacre.”