July 28th 2015: Reports have emerged of Haitians previously residing in Dominican Republic moving to settlement camps in Haiti along the border with the Dominican Republic. While the residents of the camps have not been formally deported many are moving to these settlement camps in anticipation of August 1st, the day deportations are scheduled to begin. Around 500,000 Haitians living the Dominican Republic are now currently at risk of being deported. This is the result of  a 2013 court ruling in the Dominican Republic which “stripped children of Haitian migrants of their citizenship retroactively to 1930” and a subsequent ultimatum given by the Dominican Government. The ultimatum forced undocumented Haitians to either register with state authorities by July 15th or be deported. Despite the opportunity to register with the state only  300 Haitians were able to successfully do so, prompting many within the international community to argue that the registration process was designed to fail. Many residents of the settlement camps are living in tents made from sticks, often lacking a water source. 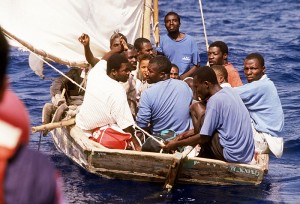 August 1994: August 1994 marked the beginning of  Operation Sea Signal, which would last until February 1996. In response to the massive influx of refugees from Haiti and Cuba, attempting to escape dictatorship in their respective countries the U.S Military launched a joint operation of the Coast Guard and Navy (Joint Task Force 160) to rescue these refugees from the dangerous passage to the United States. Once officials of Joint Task Force 160 intercepted refugees in passage they would bring them to Guantanamo Bay for holding while they attempted to apply for asylum. During this operation Guantanamo Bay became home to over 50,000 Haitian and Cuban refugees. The vast majority of the 30,000 Cuban refugees were granted asylum to the United  States. The majority of Haitian refugees were  were not granted asylum and sent back to Haiti.