This week, Guantánamo attorneys were prevented from subpoenaing Yemeni President Ali Abdullah Saleh regarding alleged Al Qaida bomber Abd al Rahim al Nashiri. Nashiri in implicated in the USS Cole bombing off Aden, Yemen in October 2000.
Saleh is currently in the U.S. receiving medical treatment, and Secretary of State Hillary Clinton has given him full amnesty. Nashiri defense lawyer Richard Kammen says Saleh has critical knowledge regarding the case, claiming that members of the Yemeni government are also implicated in the USS Cole bombing.
Also this week: 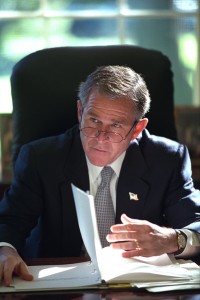 Ten years ago this week, President George W. Bush signed the “Humane Treatment of Taliban and al Qaeda Detainees” memorandum. This memo is thought by some the be the predecessor to other more notorious “torture memos,” such as the Bybee Memo. More explicitly, this memorandum marks the U.S. government’s departure from a strict reading of the Geneva Convention, stating that based on the specific and unique threat of terrorism “none of the provisions of Geneva apply to our conflict with al Qaeda in Afghanistan or elsewhere.”