Reflection: “Guantánamo is a place that makes people lose their minds”

Given a choice, I would choose to meet Bisher al-Rawi, who was detained at Guantánamo for four and a half years without charge and later released. Listening to his story, the statement that “Guantánamo is a place that makes people lose their minds” really struck me. Detainees, who are held indefinitely and without charge, must indeed lose their minds after years of ill treatment and repeated interrogations. 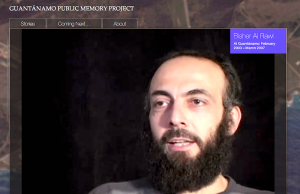 After experiencing such injustice, it is incredible that al-Rawi can tell his story so calmly and seemingly without malice. Speaking to him about his ability to move on from the trauma of being held in Afghanistan and at Guantánamo could yield important lessons about the human capacity to move past trauma and create a better life.
His story is representative of the kind of treatment that current detainees experience on a regular basis at Guantánamo. His detention at the facility is another chapter in the ongoing story of holding non-Americans at the base. However, I would choose questions that focus less on his detention experience and more on his life afterwards. Because he has clearly told his detention story before, the period afterwards is of more interest to me.
In the interview with al-Rawi on the Guantánamo Public Memory Project website, it’s clear that he has moved on with his life. He does indicate that re-entering the real world after being imprisoned is difficult, but he smiles when he talks about his wife and young son. Somehow he has managed to create life for himself after the horror of wrongful detention and torture. I would be interested to question him on how he has found the personal fortitude to make a life for himself that is not governed by his past imprisonment. How has he rebuilt his life without hatred and animosity for his captors? How does he cope with the reality of his past while trying to live happily in the present?
It would be helpful to include others in this dialogue as well, particularly other detainees who have been released. Talking with one another about how they deal with their prison term could help to create a sense that none of them are alone in their experiences, and could act as a powerful tool to reenter society successfully. Also helpful for the dialogue would be the inclusion of military prison guards, either those from Guantánamo or other bases. By speaking with one another, these two groups, on very different sides of the detention experience, could better understand the perspective of the “other.”

3 Comments to: Reflection: “Guantánamo is a place that makes people lose their minds”

This interview with al-Rawi was very captivating. He’s an engaging man with a hell of a story. Beyond the interview, this reflection piece by Schmidl is also interesting – I agree totally, “Guantanamo is a place where people lose their minds” does stick out, and does capture the main idea of al-Rawi’s experience.

The piece is compelling because I’d bet that stories like these are not easily aired on T.V., as they are likely shunned from popular American media platforms. Honestly, how often does the American public hear stories like this directly from the source? Rarely, if ever. Actually hearing this personal story from al-Rawi, as opposed to a news anchor, a journalist, or a politician, adds an emotional element and a sense of pain and reality, which makes this interview gritty yet eloquent, and hard to forget.

Also, al-Rawi ends his interview on an idealistic note, advocating that all suspected criminals/terrorists “should have their day in court”. Honestly, I have been skeptical about this idea, but after hearing al-Rawi’s story, and the injustices he has endured over such an extended period of time, I find myself much more open to his suggestion. Overall, as an American citizen, it is important to hear POV’s like this so that we are better informed and more aware of what is going on (or what has already transpired) at GTMO. At the very least, with more exposure of people like al-Rawi, Americans should be (and need to be) better informed, especially by sources outside of the major U.S. news outlets, which the Guantanamo Public Memory Project seemingly seeks to achieve.

I completely agree with the comment left by dl, I feel everyone should have their rights to a fair court trial. I believe that even if the person on trial is wrong or hurt people in any way he/she should have a fair court trial and be trial in American land, and Americans should be better informed with everything that is going on outside of US.

“Guantanamo is a place where people lose their minds” is indeed a very powerful phrase. After reading that phrase and your post, I questioned myself how people can face their newly acquired liberty and continue with their lives after having being imprisoned for an indefinite number of years without a trial. How it must be to wait in a cell which measures only approximately 10 feet long by 7 feet wide for 1643 day without knowing exactly when your anguish will end? That is definitively a form of mental torture to which detainees at the US naval station at Guantánamo Bay, Cuba, are exposed. I believe that recovering from such experience must not be an easy task, but people like Bisher al-Rawi somehow manage to do it. That is impressive and that is why it would be interesting to talk to him now.

On the other hand, as a person who believes in the rule of law, I totally agree with both comment that everyone, whether criminals or not, must have a day in court. The right to a fair trial has been a conquest of the human rights movement and, thus, must not be relinquished by anyone at any time or taken away by anyone.