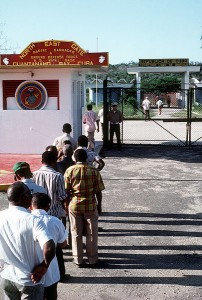 Cuban workers exiting from the northeast gate of Guantánamo Bay naval base in 1983. All Cuban commuters working for the base at this time had been hired in 1961 or earlier, avoided mass firings in 1964, and finally received pensions in 1979. Photo from Wikipedia Commons.

The role of Cuban workers on the Guantánamo Bay naval base has fluctuated over time. Those who work on the base, but return to homes in Cuba are referred to as “commuters.” In the 1950s, according to historian Jonathan Hansen, there were as many as 3,000 commuters. However, as the Cold War progressed their numbers dropped, and today there are only three.
Even before the base was closed off from the surrounding island during the Cold War, labor relations between the U.S. military and non-resident workers were fraught with difficulties. The military and private employment contractors strove to keep pay for Cuban workers down through part-time rather than full-time contracts, racial discrimination, and preventing labor unions. Even the personal privacy of the workers was eschewed as the military became increasingly concerned with petty thefts committed on the base. They conducted physical searches of the commuters before they left the base.
In 1961 Castro forbade Cubans from seeking jobs on the base. Those who had jobs could remain, but they could not be replaced by other Cuban workers when they retired or quit. As tension between Cuba and the U.S. progressed, the Cuban government shut off water mains to the base. As Jana Lipman discusses in Guantánamo: A Working-Class History Between Empire and Revolution, the U.S. responded by dismissing all but 750 commuters. The workers that remained faced intense suspicion from both sides. Their commute became an elaborate travel process involving two buses, two inspections, and a mile-long walk. As the Cuban commuters began dropping out of the Guantánamo work force, the base replaced them with Jamaican and, later, Filipino workers.
The commuters still working on the base were finally permitted to receive U.S. government pensions in 1979, eighteen plus years after they were hired. When the Cuban government began permitting the circulation of U.S. dollars in 1993, those commuters with pensions gained a significant boost to their economic status while those workers who had left before 1979 did not. Tensions remain among those with pensions because they only have access to the money through the last three elderly commuters, who deliver it by hand to their former co-workers.
The use of non-residential Cuban workers on the base relates to much larger issues of race and imperialism. Racial politics were written into the pay scale for commuters, with darker-skinned workers being paid less than lighter-skinned colleagues. By the time Castro came to power, the U.S. had heavily tipped the Cuban economy to their favor, beginning as early as the mid-nineteenth century. The 1959 revolution in Cuba can be traced back to the Cuban economy’s subordination to the U.S. economy, which is directly related to the U.S. occupation of Guantánamo Bay. The shift to non-Cuban workers hired through private contracting companies in the last few decades indicates that imperialism is no longer geographically tied, but now resides primarily in spending power. The long-term effects of the privatization and internationalization of U.S. military support remain to be seen, but will manifest themselves in Guantánamo as much as elsewhere.
Posted by Victoria Sheridan – MA Candidate at Rutgers University
Rutgers University is participating in the Guantánamo Public Memory Project‘s National Dialogue and Traveling Exhibit. Opening at NYU’s Kimmel Center for University Life Windows Gallery in December 2012 and traveling to 9 sites (and counting) across the country through at least 2014, the exhibit will explore GTMO’s history from US occupation in 1898 to today’s debates and visions for its future. The exhibit is being developed through a unique collaboration among a growing number of universities as a dialogue among their students, communities, and people with first-hand experience at GTMO.