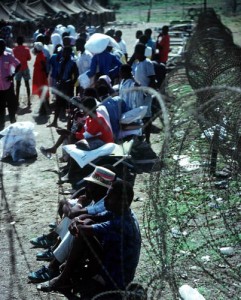 In the early 1990s, with the arrival of thousands of Haitian immigrants, Guantánamo Bay served as one of the first sites of mass HIV testing for immigrants. Over 260 individuals tested positive and were segregated in Camp Bulkeley, a tent camp surrounded by barbed wire. Haitians reported limited mobility, poor sanitation, and insufficient and unclean water.
Some told their stories to news media to bring attention to their plight. One woman recalled how her child had been taken away and sent to America while she languished in the HIV camp. Her story demonstrates the misinformation in the camp, as she did not know much about her child’s whereabouts or her own health situation. Haitians, demoralized by their conditions and treatment, rioted on several occasions setting fire to the buildings or throwing stones at the guards. Camp Bulkeley is a valuable part of Guantánamo’s past because it moves the debate about the U.S. government’s role in national security beyond terrorism to issues surrounding public health and individual rights. In the later years of the AIDS crisis, government agents and military personnel segregated HIV-positive Haitians in a “humanitarian camp” that was more like a prison.
This history connects Guantánamo as a third space and the nation that continued to operate it. The federal government attempted to put the refugees on Guantánamo outside of the American legal system. In 1993 the U.S. Senate introduced a clause into the Immigration & Nationality Act (INA) prohibiting HIV-positive immigrants from entering the country. This complicated the refugee situation as many were prevented from obtaining lawyers to pursue their case. AIDS activists highlighted the experience at Camp Bulkeley as part of their campaign to educate the public about the disease. In order to bring attention, AIDS activists and students organized hunger strikes. Several court cases found that the U.S. Constitution covered refugees and that their rights were being violated. But the Supreme Court disagreed. And while the refugees eventually removed, Guantánamo continued to operate as a “rights free” space.
This experience brings up important questions about the government’s role in protecting the nation from a public health threat. Are there limitations to how the government should act to prevent a potential pandemic? Should the government segregate potentially dangerous groups? During a humanitarian crisis, how much attention to should be given to solving the overall crisis and how much should be devoted to health issues? How should health risks be worked into emergency planning for a refugee crisis? How should people with diseases like HIV/AIDS be treated in applying for asylum? What treatments should officials be responsible for providing? Does the segregation of HIV-positive refugees have implications for public health issues in the U.S.? Are individuals or government officials responsible for making decisions about community health?
Fruitful dialogues involve multiple global and U.S. stakeholders: immigration officials and refugees, global health organizations and national leaders, local health experts and anti-vaccine activities, communities with significant immigrant populations, and high school and college students.

As interesting and potentially important as the questions raised here are, I do not think they are directly relevant to the situation described. The humanitarian failure that was Camp Bulkeley cannot be explained or justified by the language of public health threats or dangerous risks. The HIV-positive Haitian refugees were neither—they were a public relations hazard. By the early 1990s, healthcare professionals knew that HIV was not casually communicable, so granting asylum to HIV-positive Haitian refugees was never akin to inviting a potential pandemic into the United States. That being said, it may have been seen that way by the under-informed, who were still very fearful of HIV and AIDS (“Public Heath Threat Cited in Isolation of Ill Haitians,” Los Angeles Times, April 25, 1992). However, at least in my view, it is not the job of government to kowtow to unfounded fear, but rather to assuage that fear and make decisions based on the best available information— information that ought to have shown that the HIV-positive Haitians were neither a legitimate public health threat, nor a dangerous group in need of isolation. They were, however, a public relations risk for the government. In the words of Michael Cardozo of the Justice department, it was felt that the Clinton administration could “weather the dead HIV-positive Haitians on Guantanamo better than the political fallout of letting them into the US.” (Brant Goldstein, Storming the Court, 2005). The decision to detain the HIV-positive Haitians was never a question of public health vs. humanitarianism, it was a question of political expediency.
Posted by Kerry McDonough – MA Candidate at Northeastern University