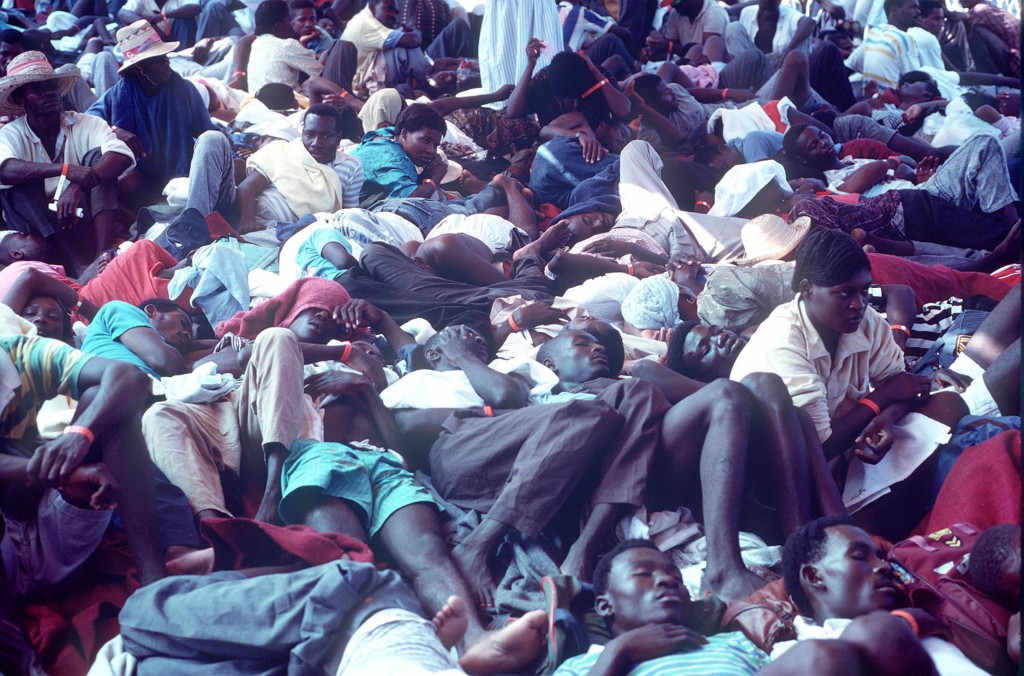 Haitian migrants aboard a Coast Guard vessel as they are taken to camps at Guantánamo Bay, Cuba. USCG photo by PA1 Eric Eggen.

Throughout Haiti’s history, it has been a powerful place. From the slave revolt to the populist movements in the late 20th Century, Haiti has been a place that is feared and oppressed by strong global powers. Yet Haiti is not usually discussed in terms of protest and power. As Nancy Dorsinville said, “They call us the poorest country in the hemisphere, but I think that is arguable. I think we are the most impoverished.” (The Tech). Coming from an academic culture that values World Bank statistics and third party international problem solving, it has been a challenge to tell the story of people that migrated, sought refuge, and were battered and mistreated by political and economic actors in such large numbers.

Our group has found that it is easy to get caught up in broad political narratives of U.S. imperialism and human rights abuses. The processing of Haitian refugees at Guantánamo, in particular, was a dehumanizing process. Many who sought political asylum were not given the chance to justify their claim. Most of those that were given the chance were dismissed, a decision to support US political interests, ignoring the refugee’s “reasonable fear” of persecution in Haiti.

It is hard to represent the stories of Haitian refugees without dehumanizing them again. They are not just people that things happen to, but a people with a culture and a soul who have power. Many newspaper sources portray Haitian refugees as victims of abuse who are seeking the “American Dream.” Many more only discuss the issue of HIV-positive refugees, perpetuating the false association of HIV with Haiti (Paik).

This narrative of dehumanization and rightlessness is one that has been repeated many times in many places and circumstances. It is a story that is relevant today, in Rhode Island and around the world, for immigrants and for refugees. Whether it is an issue of refugees being resettled into housing that does not meet health regulations (RI Department of Health) or undocumented immigrants that are unable to obtain even basic necessities because of their legal status, it is clear that the legal and regulatory system does not view itself as dealing with humans worthy of dignity.

One difficulty is that all of our resources are in English and access to the base at Guantánamo was poor and closely regulated. What story can we tell besides that of the oppressor? It would seem that we are limited not only to US perspective, but to US perspective filtered through the military, or alternatively a sweeping and political narrative of rightlessness. But we are not; there is nothing humanizing in being told you are a part of a repeating history of oppression, or to have your story told with you as a passive actor trapt within your oppressor’s narrative. This panel would not be worth putting together if that was all we could tell. Through creativity, empathy, and sensitivity we are trying to access the unrecorded history of a people and a place.

Mara Freilich is a student at Brown University.

2 Comments to: A Difficult History

I appreciate your point that Haitians at Guantánamo (or any recipients of aid or asylum, for that matter) are “not just people that things happen to.” While presenting refugees as dangerous or undeserving is clearly problematic, you rightly underscore the fact that it is also harmful to represent people as ambassadors of suffering or to reduce them to generalized facelessness. Similarly, even when discussing individuals’ experiences, you argue that we must resist the tendency to cast people solely as victims. The big question we’re left with is “how do you tell someone else’s story?”

To take this idea even further, what does sensitivity actually mean, in this case? I think it is connected to your notes on resources; different voices have different implications.  If your story can only be told through American narrative data, maybe sensitivity is simply thoughtful statements of educated advocacy, with the acknowledgement that real empathy is elusive: if you have not been a Haitian refugee, you do not–nor will you ever–truly know the experience of a Haitian refugee. If you have access to texts from the people you are working to represent (even retrospective, graphic, or non-English ones!), maybe it just means giving those resources  room to talk. The answers, of course, are never easy, but one of the things I love about this project is that teams like yours seem to be asking all the right questions.

A question inspired by your article that I ask myself is: Shall Haitians be the ones that tell their own history?

You also mentioned that in telling their stories, we may be dehumanizing Haitians. So the question I have is: What if Haitians do not want their stories to be told?

I would like to know your perspectives on them.