Stepping into the Unknown 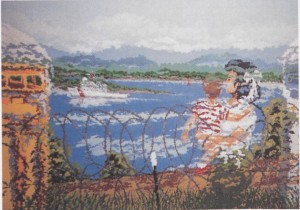 It seems that most media coverage of Guantánamo today is centered on what the US government should do with the naval base, but I am reasonably certain that, through no fault of their own, a majority of Americans have formed opinions about Guantánamo without knowing all of its history.  Before I became involved in this project, I also did not know much about Guantánamo’s history.  My previous knowledge of the base came from news blurbs in the wake of the September 11, 2001 terrorist attacks.  I heard that suspected terrorists had been taken to Guantánamo Bay and were tortured for information, and that the US government was being severely criticized about this blatant violation of human rights.  I’m not even sure I knew that Guantánamo was an American naval base; I assumed it was some illusive deserted island somewhere in the Caribbean.  What surprised me most about Guantánamo’s history was the fact that it had a history beyond its 9/11 associations and that human rights had been violated at the site in the past.

This revelation should not have come as such a surprise to me, as the history of Guantánamo naval base is crucial to understanding contemporary discussions of the site today.  For instance, knowing how (and in what context) the United States navy acquired the base in the Spanish-American war allows people to more fully understand how the legal “black hole” of Guantánamo was created, which will hopefully help them make a more informed decision about what they think the government should be doing with the base.  With the upcoming presidential election, there has been some discussion about President Obama’s previous promise to shut the base down, but according to public media reports, there has been little progress on the issue.

Therefore, I hope this exhibit will encourage viewers to question fundamental issues of human rights and the protection of those rights in our world today, inspiring them to take action on these problems.  For example, when viewers see the artwork from the “Arts of Detention” panel, such as Soler’s poignant image of a woman and child looking across the bay from behind (or perhaps tangled in) coils of razor wire, I hope that the problems that surround Guantánamo will become real and human in their eyes.  I hope that people are inspired by the information we present, spurring them into meaningful dialogue about the violations that happened at Guantánamo in the past and what they think the future holds for the site today.  Ultimately, my hope is that this dialogue will motivate our viewers to take action on these matters, and that they will promise to become involved in these issues after they leave the exhibit.

2 Comments to: Stepping into the Unknown

I too didn’t know anything about Guántanamo before taking this course. I feel like our generation has missed a lot of the history because we weren’t attentively watching and understanding the news as recently as the 90’s, when Haitians were being detained there to prevent the spread of HIV. This is why we need to educate generations alike about the U.S and Cuba’s history.
I agree that it is very important to share this information with the public. Guántanamo floats in and out of the news, forgotten just as quickly as it’s remembered. The future of Guántanamo wasn’t even mentioned in the Presidential debate, probably because it isn’t a hot topic this week. While I do find it beneficial to educate the public about the dark history of Guántanamo, I don’t know what kind of change is possible. Even if every citizen in the U.S. created an alliance with one another to stand against the existence of Guántanamo, and convinced the U.S. government to change its purpose, the people would still have to convince Cuba to change the purpose of that land as well. Based on our history with Cuba, I doubt they would be willing to alter the contract that was originally ratified in 1903, merely because of the context of which it was ratified.

I really relate to the very first statement you make about how media only covers what the US government should do with Guantánamo Bay. This leaves out one very important question that we talked about quite a bit in our class, and that is what is Cuba’s voice? or maybe even does Cuba have a voice at all. It is very difficult to try to find information on what Cuba wants to do with Guantánamo Bay, if you google Guantánamo you get majority US related posts. We had a team of people in our class that focused solely on attempts made by Cuba to close Guantánamo Bay and they found a lot of good information. It is very interesting to try to look at the issue from the other side of the table and this can be very difficult since I am an a US citizen and I am constantly bombarded by US centered media. To be able to really formulate a solid opinion it is necessary to try to understand all sides of an issue. That is something I do not think people really realize and that is why I really like the fact that you do bring up our lack of coverage of anything besides what the US wants.

-Will Vann, Student at The University of Minnesota- Twin Cities