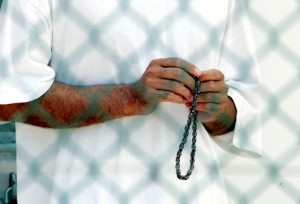 A detainee holds prayer beads. The majority of prisoners held at Guantánamo following 9/11 have been Muslims.
Courtesy of © Mark Wilson/Pool/Reuters/Corbis

Have the September 11th terrorist attacks changed how you view or treat others? For many, unfortunately, the answer is probably “yes.” The events of 9/11, the United States government’s response to them, and an increasing public misunderstanding of Islam have created a culture of collective suspicion and prejudice towards Muslims (or those perceived to be Muslim). This “unfounded fear of and hostility towards Islam” is popularly known as “Islamophobia.” Whether this attitude occurs intentionally or subconsciously, this mindset has resulted in intensifying stereotypes, hate crimes, discrimination and often condones the violation of civil rights of Muslim-Americans.

The Muslim community’s response to the 9/11 attacks, both initially and today, remains remarkably patriotic and supports cooperation with government authorities. Yet immediately following 9/11, Muslim-Americans, as well as those perceived to be Muslims, often endured increased suspicion from other Americans and even experienced physical violence, supposedly in retaliation for the attacks. Over a decade later, Muslims are still subjected to hate crimes, workplace discrimination, unreasonable arrest and detention, passenger profiling, verbal (especially through hate mail and internet outlets) and physical harassment and abuse. Although racism and anti-Semitism are considered socially unacceptable, ethnic profiling against Muslim-Americans is often encouraged and accepted by government authorities and popular media.

Fortunately, some people are actively working to counter the rise of Islamophobia and many communities have come together showing solidarity and interfaith cooperation with their Muslim neighbors. Anyone can take steps to defeat Islamophobia by encouraging empathy for others and participating in activities that promote discussion between people of different faiths and ethnicities. More information on countering Islamophobia can be found on The Muslim Public Affairs Council website which provides helpful resources, links and workshops. It is efforts such as these that can help create an atmosphere of trust and dialogue, as opposed to fear and misunderstanding.

So what does Islamophobia have to do with Guantánamo?  Muslims constitute almost all of those detained there since 9/11. For that reason, although Guantánamo may not figure largely in the minds of some Americans, Islamophobia strongly influences Western culture and plays a large part in what Americans do understand about Guantánamo and its detainees. To many American’s the prevalent misconception that Islam is equivalent with terrorism unfortunately justifies the violation of Muslim’s civil liberties in the United States as well as violations of detainees’ human rights at Guantánamo. Yet, the American Civil Liberties Union’s “A Call to Courage” report states that,

“by allowing and in some cases actively encouraging the fear of terrorism to divide Americans by religion, race, and belief, our political leaders are fracturing this nation’s greatest strength: its ability to integrate diverse strands into a unified whole on the basis of shared, pluralistic, democratic values.”

Remembering each person’s right to civil liberties and advocating for greater awareness and knowledge can persuade people to reconsider how they view or treat those around them and in time provide an antidote for Islamophobia.