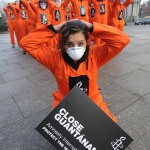 In considering a reflective blog on what strikes me most about the Guantanamo Public Memory Project, my attention immediately focuses on recognizing the emotional connection that many people share regarding the United States government and U.S. presence in Guantánamo Bay.   Before being introduced to this thought-provoking exhibit, I had no previous knowledge of the racial tensions, prison conditions, or imperialistic policies associated with the base.  This disconnect from the present has revealed the negativity surrounding this issue and I am concerned about the exhibit’s ability to maintain an objective tone within the collective narrative.

As public historians we need to remember that the base has significantly played a role in United States history for centuries and continues to have strategic value.  The narrative and visuals within the project’s panels must avoid the temptations of being caught up in the politically-charged whirlwinds surrounding the War on Terror or incidents of torture.  This traveling exhibit can be very effective without relying on controversy and mysterious cover-ups.  This project can stimulate discussion and generate insightful ideas without calling for protest or some type of mass public reaction to the presumed history of atrocities occurring at the base.  We need to be careful not to exaggerate for effect but strive to inform constructively through representing Guantánamo objectively and not allowing the present to dictate the direction or the voice of the exhibit. These variables and important elements are merely part of a greater story and should be conveyed with equal weight along with other issues from other eras.

The Guantánamo Public Memory Project is not a crusade meant to mobilize the public through inducing moralism but rather to educate the international stakeholders through an in-depth examination, while encouraging them to use logical reasoning in formulating their thoughts about the future.  This exhibit should present the history of Guantánamo in a manner that aims for holistic representation but does not fall victim to agendas of the human rights activists aiming for social justice or the instigators of controversies regarding the demonization of American imperial objectives.  This project has the opportunity to inspire and motivate an international audience while creating both practical and imaginative ideas for our nation’s involvement in Guantánamo.  I am excited to be a part of this coalition of public historians and am very optimistic that we can present such relevant stories in a style that is engaging, thought provoking, and objective.

Arizona State University is participating in the Guantánamo Public Memory Project‘s National Dialogue and Traveling Exhibit. Opening at NYU’s Kimmel Center for University Life Windows Gallery in December 2012 and traveling to 9 sites (and counting) across the country through at least 2014, the exhibit will explore GTMO’s history from US occupation in 1898 to today’s debates and visions for its future. The exhibit is being developed through a unique collaboration among a growing number of universities as a dialogue among their students, communities, and people with first-hand experience at GTMO

I agree with the heart of your argument – that we must avoid the pitfalls of turning this exhibit into a forum for partisan advocacy – but I’m skeptical as to how we can completely eschew the “politically charged whirlwinds” of current events. The present will dictate at least a part of the direction and voice of the exhibit because an important aspect of our project is exploring the ramifications of today’s debates on Guantánamo and what will happen to the site going forward, which in itself is an exercise in political discourse.

The goal of “objectivity” requires further clarification as well. Objectivism, literally defined, constitutes “expressing or dealing with facts or conditions as perceived without distortion by personal feelings, prejudices, or interpretations.” While we should clearly avoid any prejudicial claims, removing our personal and collective feelings from the exhibit runs the risk of turning it into a bland, textbook-like presentation with no purpose or storyteller. Furthermore, we as public historians are interpreters. The facts don’t necessarily speak for themselves. Ultimately, while we should strive to be objective as possible, we should also make sure to craft an interpretation that is honest; one that clearly states our goals and objectives and educates the public in a way that fosters discussion, allowing visitors to draw their own conclusions. The possibility of human rights activists and other instigators using our exhibit to bolster their own causes exists, but that would be far preferable to having our exhibit roundly ignored and forgotten.

The Guantánamo Public Memory Project does indeed have a difficult task of engaging the public with a topic that makes many people uncomfortable exactly because it continues to be an ongoing contemporary issue. It will be a struggle to balance between provoking dialogue and avoiding the promotion of a certain political agenda. Public historians certainly do not need to argue for any particular future or outcome, but part of their role is to contextualize modern social issues within the past. Presenting the facts of a complex and unsettling topic does not mean condoning those events or actions but instead can advocate for a greater awareness of them. What are the undeniable facts about Guantánamo that the project can help the public become more knowledgeable about? What is up for debate? By trying to answer these questions the project can also then also democratize the history of Guantánamo. When one viewpoint of a historical event takes precedent over others, it can create a false perspective. This project can replace unbalanced representations of Guantánamo by asking how they occurred in the first place, and by interpreting previously neglected experiences, such as Haitian refugees, Cuban base workers or detainees. While the project should be careful not to distort historical events, hopefully it can ultimately provide a space for people to recognize and reflect on their own assumptions.

What struck me the most about this post was the idea that the Guantánamo Public Memory Project (GPMP) exhibit panels should avoid the “temptations of being caught up in politically charged whirlwinds.” While I agree that the panels should present a holistic and unbiased view of Guantánamo and its history, I struggle with the concept that the exhibit can truly break free from the political controversy surrounding the base and actions that have occurred there especially in a post-9/11 context. I feel that the GPMP panels must not avoid certain truths, such as the occurrence of torture, just to remain politically neutral. However, the project must strike a delicate balance between reporting facts while not exaggerating or advocating for a certain position or action. It is my hope that the resulting dialogue from the exhibition will drive people to create numerous potential steps for action that will then be executed because of the personal investment visitors will hopefully feel after visiting the GPMP exhibition and/or website. The post also cautions against succumbing to the agendas of human rights activist groups. While violent demonstrations are certainly outside the scope of this project, I wonder if human rights groups may not be a potential partner for some of the public programming initiatives each host site is developing in coordination with the exhibit. In my opinions the important thing is to be up front about the project’s goals when meeting with potential partners in order to avoid potential conflict when creating content for programs.
Posted by Stephanie Hebda – MA Candidate Indiana University Purdue University Indianapolis (IUPUI)

Your post resonates with me because when I initially started working on this project, I too was a blank slate, with little knowledge of Guantanamo and its multifarious problems. I did not grow up in the US, so I was also untouched by any popular opinion that the media may have tried disseminating. So my objective on embarking on this project was to synthesize the many existing points of view and to try to reach my own conclusion objectively.
In hindsight, this was a naïve endeavor. “Maintaining Objectivity”, as you hope to, is not possible when designing an exhibit such as this, even if you make a conscious attempt to. My opinions on Guantanamo were largely shaped by the first few readings I did, which included Amy Kaplan “Where is Guantanamo”, Jonathan Hansen’s “Guantanamo: An American History” and “Testifying to Rightlessness” by AN Paik. All of these do not speak favorably of US foreign policy, and the way it exploited Guantanamo’s ambiguous legal status.
Now as much as my team and I try to be objective in the selection of the material we choose to portray on our panel, our biases, however freshly they may have been formed, will definitely seep through the form of what pictures and phrases we choose to portray, and what we omit.
There is a trade off between being well informed on the matter and being objective. To an extent I feel that the more I know, the less objective I become; but I am fine with this because it’s better to hold justified biases than be ignorant. Through the GPMP I have learned about an important issue of our age, but in the process, have also started seeing the involved nations in a different light.
While I too hope the project does not take the form of “a crusade meant to mobilize the public through inducing moralism but rather… educate[s] the international stakeholders,” I also feel, to a large extent, that one of the focuses of this project was to help a select group of scholars gain a detailed understanding of Guantanamo’s plight so that its history, and the histories of the people who suffered there, are not lost into oblivion in the years to come. So even if I am unable to educate the public through a neutral lens, I have still gained a lot because I have an opinion on a pertinent issue that is based on well sought out research and careful analysis.