Reflection: Close a Door, Open Another 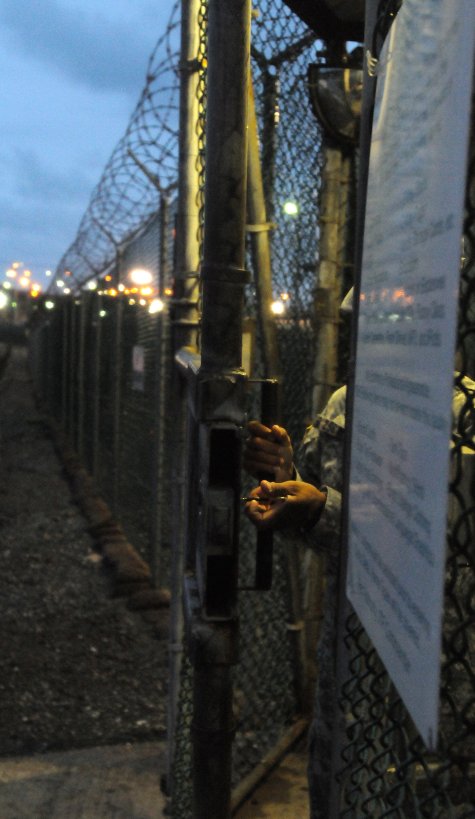 Courtesy of: [Gino Reyes [Public domain], via Wikimedia Commons].
In the early morning of September 29, 2010, a National Guard member locks the gate at Detention Camp 4.

While asking whether we can close Guantánamo, I have been struck by the complexity of the question. The history of the base begins over a century ago and since then the base has functioned as an imperial tool for the United States. Amy Kaplan’s essay “Where is Guantanamo?” outlines the convoluted legal history of the base by asking the question raised in the piece’s title. Kaplan leads us to the idea that Guantánamo is everywhere.

It cannot simply be shut down by closing its doors and leaving it alone. There are people detained in Guantánamo who are referred to as “enemy combatants” which, with the court’s backing has created a category, as Kaplan puts it, “…that erodes the distinctions among citizens and aliens, immigrants and criminals, prisoners and detainees, terrorists and refugees.” Ultimately, this means that people become less than people in the eyes of the court system. These detainees are subject to the labels that the Executive Branch applies to them and will ultimately have or not have rights based on that label. But this applies to Guantánamo specifically as it is not technically the sovereignty of the United States but of Cuba.

What has been created is an island of dictatorship set apart from the democratic nation that controls it, removed from the country that owns it and untouchable to the world that attempts to restrict it.

Guantánamo Bay is just a piece of land that sits on the Southeastern corner of Cuba. It has beautiful beaches, a rich ecosystem and a large bay that has made it an attractive port. So how, from being just a simple piece of land, can something evolve into this? How can this be justified and what was the process that led to this situation?

What is important to show in Guantánamo’s history is the process that made it what it is now. It is important to understand how a democratic nation can have a piece of itself eroded from the foundation of human rights and projected onto another piece of land.

I have been struck by the question of closing Guantánamo because it seems that in the past, each time it might be closed or abandoned, something else becomes of it. The most recent change in its history has provided an even sharper stab into the heart of human rights. It is imperative that Guantánamo becomes public knowledge. It is vital to understand the process that made the legal black hole a reality so that we can see when attempts are being made to create a similar environment elsewhere. Without a knowledge of the past, we are defenseless in the future.

University of Minnesota – Twin Cities is participating in the Guantánamo Public Memory Project‘s National Dialogue and Traveling Exhibit. Opening at NYU’s Kimmel Center for University Life Windows Gallery in December 2012 and traveling to 9 sites (and counting) across the country through at least 2014, the exhibit will explore GTMO’s history from US occupation in 1898 to today’s debates and visions for its future. The exhibit is being developed through a unique collaboration among a growing number of universities as a dialogue among their students, communities, and people with first-hand experience at GTMO.

One Comment to: Reflection: Close a Door, Open Another

Guantánamo is a protocols-free space that could be physically recreated in multiple areas, and I agree with your argument that it is important to make public how the Executive Branch created such a law-less space through legal arguments and deliberately ambiguous terminology (e.g. “enemy combatant”). The question of whether or not Guantánamo can be closed is further complicated by the power of the Executive Branch to “legally” recreate or reopen Guantánamo at CIA “black sites” overseas (http://www.newyorker.com/reporting/2007/08/13/070813fa_fact_mayer?currentPage=all).

The Department of Defense established a detainee facility at the Bagram Temporary Internment Facility near Kabul, Afghanistan, before the Supreme Court’s decisions in Rasul v. Bush and Hamdi v. Rumsfeld, in which the justices ruled that federal courts retained jurisdiction over the habeas corpus petitions filed on behalf of Guantánamo detainees. Reports of Army-inflicted abuse and homicide at Bagram surfaced as early as 2002 (http://www.nytimes.com/2005/05/20/international/asia/20abuse.html?pagewanted=all&_r=1&amp;). Originally a stopover on the way to detention camps in Afghanistan and the U.S. naval base in Cuba, Bagram has been increasingly utilized as a “transplanted” Guantánamo (http://www.youtube.com/watch?v=Lz8A8kBPwkI). The right of Bagram detainees to file habeas corpus petitions in federal courts has been the subject of a series of courts cases (see link to Al Maqaleh v. Gates case below) that establish the detention center as another space which the Executive Branch sought to place outside of U.S. law through legal arguments.

Thus closing GTMO in Cuba could potentially result in the Executive Branch opening more detention/interrogation camps in extraterritorial locations. This is why, as you illustrate in your blog post, it is important to explore the legal precedents to setting up an “untouchable” space that is “removed from the country that owns it.” It is only through contesting the model of Guantánamo as a protocols-free space that the existence of the detainment camp, and by extension all of its manifestations (e.g. Bagram in Afghanistan), can be challenged.