Family: What Made GTMO Unique

When I first joined the Guantanamo Public Memory Project I assumed that it would focus solely on the controversies that have developed over the past several years. Since that time my team and I have listened to countless interviews and gained a wonderful insight as to what living on the naval station meant to those who have lived there and what they saw as the most important contributions to life on the base. The individuals who shared their stories most often communicated cherished memories. The interview of Mike and Betty Fair, and many more like it, allowed me to understand the significance of family life for the Guantanamo Bay base residents. 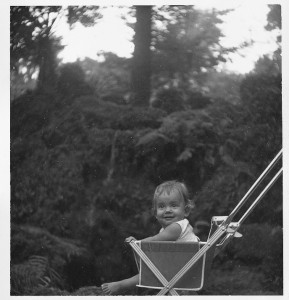 A child play near her home on the Guantánamo Bay naval station. Photo courtesy of Sandi Hamilton.

The oral histories collected this past summer by the University of West Florida’s Public History Program, led by Dr. Patrick Moore, reflect the importance of family in defining life on the naval station. Mike and Betty Fair, who currently reside in Pensacola, Florida, graciously volunteered to share their experience of moving to and residing on the Guantanamo Bay base in the early 1990s. Mike and Betty have three sons who at that time were approaching the years that all parents fear, adolescence. Mike had spent the three and a half years prior to moving to the naval station in Guantanamo Bay out at sea. When faced with the choice of their next duty assignment Mike and Betty decided to place family first and put in for a location they hoped would allow their family to spend quality time together. Mike had previously visited the Guantanamo Bay base with a fleet training group and had heard that “it was a great place to capture some family time.” Mike and Betty looked forward to the benefits that this move could provide for their family before Mike would ship back out to sea at the end of the tour.

Mike and Betty moved to the naval station in Guantanamo Bay and commented on their satisfaction by stating, “It was great, just like we thought it would be. It was a very small, tight community.” Mike enjoyed that he could work eighteen hours in a day, but he would still be with or around family. Despite the long hours, he would still know what happened within the community. Mike said, “That was the beauty of being at Gitmo.” Overall, Mike and Betty felt that “it was a great atmosphere for the family.”

However, that changed due to the evacuation of the dependents residing on the naval station in Guantanamo Bay in 1994. Mike remarked, “The best plans to have family time together [were] short lived, but very much enjoyed while we were there.” Betty and the boys returned to the United States, but Mike remained to complete his tour of duty. He experienced a drastic change in the social atmosphere of the naval station. While Mike had previously enjoyed the freedom of living in a safe community, he now found the need to lock his doors as the crime rate had increased. He noticed that without the structure of family the naval station lost its idyllic charm. Some dependents returned a few years after the evacuation, but Betty and the boys remained state-side. Interviews conducted with individuals who had resided in the Guantanamo Bay base in the late 1990s indicated that family life had been reinstated and the close, connected community atmosphere resumed. Mike Fisk, a 1995 resident, stated that he was “living in a Jimmy Buffet song.”

I find joy in knowing that amongst all of the controversial events that surround Guantanamo, positive qualities also exist. The families that contribute to developing a positive environment receive quality family memories that they will cherish forever. The dynamic of the community structure in the Guantanamo Bay base area centers on the family. As I have learned, it is what has made the naval station a unique duty assignment over the past several decades. I look forward to communicating the narratives of those who shared in this aspect of life on the Guantanamo Bay base. I believe that these individuals’ stories are essential to understanding the memory of the naval station in Guantanamo Bay.