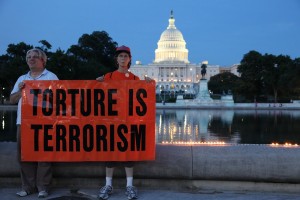 With Guantánamo remaining open and available for administrations to use as a legal black hole, many have protested the conditions there and the policies the site has come to represent.

I am not alone when I ask, “What is torture?” In fact, many presidents have asked that same question. In attempting to answer this question, and decide for myself if I agree with the two people in this photo, I have stumbled deeper into confusion. I have become even more confused about the prospect that two different people could be administered the same force and one person is tortured and the other is not.
Some definitions I have come across have been, “…any act by which severe pain or suffering, whether physical or mental, is intentionally inflicted on a person for such purposes as obtaining from him or a third person information or a confession, punishing him for an act he or a third person has committed or is suspected of having committed, or intimidating or coercing him or a third person, or for any reason based on discrimination of any kind, when such pain or suffering is inflicted by or at the instigation of or with the consent or acquiescence of a public official or other person acting in an official capacity. It does not include pain or suffering arising only from, inherent in or incidental to lawful sanctions.” This definition is from Article 1 of the Geneva Convention.(Geneva Convention, 1975). The “Bybee Memos”, more commonly known as John Yoo’s “Torture Memos,” offer multiple slightly different definitions of “torture,” however, overall the memos suggest that in order for force to be named torture “the victim must experience intense pain or suffering of the kind that is equivalent to the pain that would be associated with serious physical injury so severe that death, organ failure, or permanent damage resulting in a loss of significant body function will likely result. If that pain or suffering is psychological…these acts must cause long-term mental harm.” It has also been called enhanced interrogation techniques and “abhorrent”. (US Dept. of Justice, 2002)
Sometimes when I am reading these different suggestions as to what exactly torture is, I can’t help but think about Jacobellis v Ohio, and Associate Justice to the United States Supreme Court, Potter Stewart, who famously uttered, “you know it when you see it” on the topic of pornography.
The situation is complicated further by the person receiving the force. The Geneva Convention stipulates that prisoners of war must be held in barracks, not prisons; however Yoo suggests that the people at Guantánamo Bay are not prisoners of war, but rather enemy combatants, which situates them outside the Geneva Convention. (Savage, 2012) The official statement from the Office of the Attorney General (John Yoo) states that the Geneva Convention doesn’t apply to al Queda, because it is not a nation-state therefore didn’t and couldn’t sign the treaty. However when dealing with the Taliban, it is not as simple; this is where Yoo’s strong opinions on electoral power shine through: “The president has the constitutional authority to temporarily suspend our treaty obligations to Afghanistan under the Geneva Convention.” According to Yoo, this ultimately deprives Taliban members of the status of “Prisoner of War,” which would allow them Geneva Convention rights. He justifies this by stating that Afghanistan was a “failed state” during the time we were in conflict with them and therefore doesn’t count as a nation-state signing the Geneva Convention. (US Dept of Justice, 2002)

If you are interested in learning more, you can watch this Congressional debate on torture.

The University of Minnesota – Twin Cities is participating in the Guantánamo Public Memory Project‘s National Dialogue and Traveling Exhibit. Opening at NYU’s Kimmel Center for University Life Windows Gallery in December 2012 and traveling to 9 sites (and counting) across the country through at least 2014, the exhibit will explore GTMO’s history from US occupation in 1898 to today’s debates and visions for its future. The exhibit is being developed through a unique collaboration among a growing number of universities as a dialogue among their students, communities, and people with first-hand experience at GTMO.
Tags: Human Rights, War on Terror
Tweet
Previous  |  Next