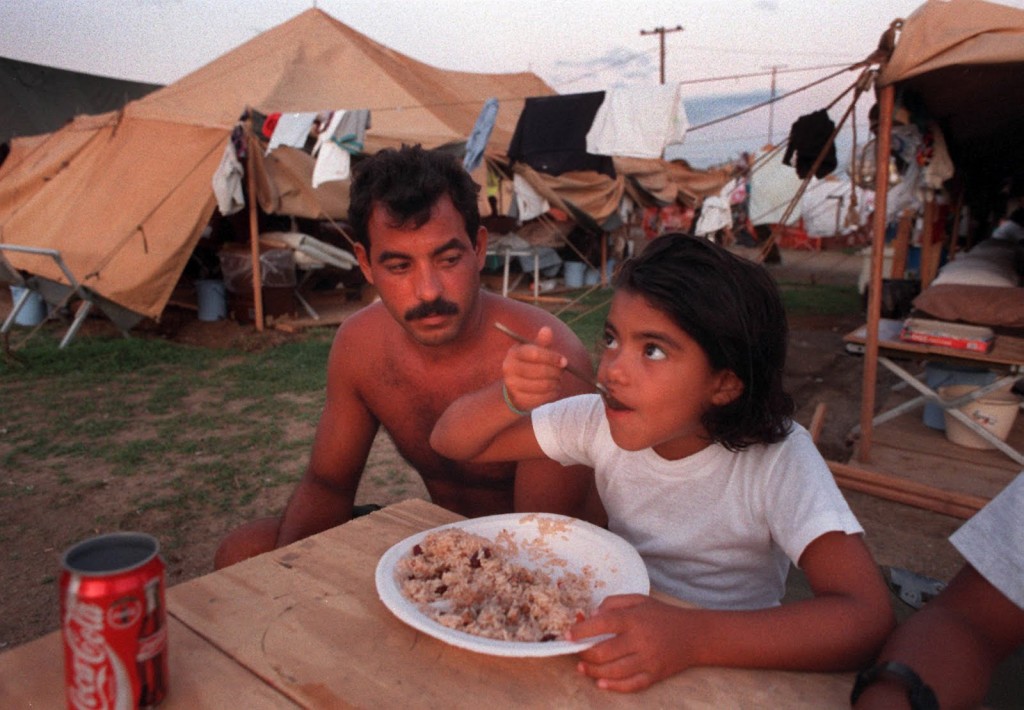 “If someone didn’t live through it, didn’t experience it, they would know nothing about it,” a man I interviewed for another project once told me, referring to a place and time that held deep meaning for him. What can those of us who’ve never been to Guantánamo know about it?

There’s knowledge derived from reading and research. Before I started interning with the Guantánamo Public Memory Project this past summer, I had learned some things about GTMO. They were mostly from news reports over the last ten years, when the U.S. naval base has become synonymous with the prison camp for suspected Al-Qaeda members. Over the past few months, I’ve gotten a much fuller idea of the sweep of GTMO’s history, from Columbus to the Spanish-American War to the War on Terror. So I do “know” it, in some sense, and have my ideas about what it means. But I know very little about daily experience there, about the events that don’t end up sprawled across the pages of newspapers or analyzed in history books.

Then there’s knowledge that comes from speaking to someone with firsthand experience. In June, I interviewed a woman who attended W.T. Sampson High School for two years in the 1980s. She told me about good times with her family, close ties she formed with classmates, teachers, and friends, the excitement of participating in (and with other high school kids, making a mockery of) a defense drill. It was a period of her life that still shapes her. Through her I learned why the base has such meaning for so many, how it brings former residents together –via everything from reunions to Facebook groups – decades after they left it. It was a perspective I couldn’t understand until I heard it in that interview, and it was enormously valuable.

I don’t mean to imply that only the people who have lived in a place or experienced an event can tell us about it, that we are hopelessly ignorant without them. We need historians and projects like this one to try to synthesize many stories, to leave a larger audience with an appreciation of the meanings of places and events to the people whose lives they touch, to fight against our own tendencies to romanticize blindly or denigrate unfairly. And everyone’s story is different.

Melissa wrote on this blog a couple months back, “Guantánamo is about people.” If there’s one thing I think this project represents, it’s that the history of this place – really, of almost any place – is multivocal. It’s about the people who were there, shaped the place and were shaped by it. That’s not to privilege their voices above others. It’s to say that it is through these accounts that we can better understand – if maybe never “know” – the history of GTMO. We learn so much more by admitting that we have so much more to learn. Knowing that inevitably, we won’t quite get it right. And it is by being aware of our own ignorance that we can better struggle to do that work of synthesis, better foster reflection and conversation instead of anger and division. Above all, we have to listen.

This project isn’t about glorifying anything. It’s about reflecting that GTMO means different things to different people. It doesn’t mean that we have to agree or sympathize with others, or that we can’t judge them. But we do have to understand that their voices are part of GTMO’s history too. Depending on whom you ask, it may be a place of pride or shame, hope or fear, refuge or prison, community or isolation – the best of America, the worst of it, or as GTMO has so often been in its history, in some gray area in between. That’s what makes this history so complicated. That’s what makes it so fascinating. That’s why, even if we know nothing about it, listening is how we start.

Nate Weisenberg is a master’s student in Public Humanities at Brown University and a research intern with the Guantánamo Public Memory Project.

2 Comments to: Listening, Knowing, and Guantánamo

Nate, I think you make wonderful points and I enjoyed reading your post. This project is truly about the people and their voices. Before starting this project, I had little knowledge about the history of Guantánamo Bay except for the post 9/11 form of a detainee camp. Likewise to your own experience, my interview opened my eyes to a new perspective of GTMO, one that was a close-knit community. The interviewee, who lived on the base in the 1950s with her family, described a cherished childhood filled with happy memories of beach trips and family outings. This was something that I had no idea existed on the base. I’m beginning to feel like I do have an understanding of what life was like in GTMO, but I realize that there is still so much to learn. I want to know how life changed throughout the years following the Cold War and how different people, not only those living on the base, but those living beyond the gate experienced it. This project has helped me understand that GTMO has had a complex history that is still being shaped by so many different voices.
-Hayley Whitehead, MA Candidate at University of North Carolina at Greensboro

Hi My sister and my father are the ones in that picture. Yaneisi and Armando Doval… Seeing this brought many good memories! I was 10 at the time and was part of Guantanamo and it was a wonderful experience for a young girl to live.

Thank you for taking me back in time