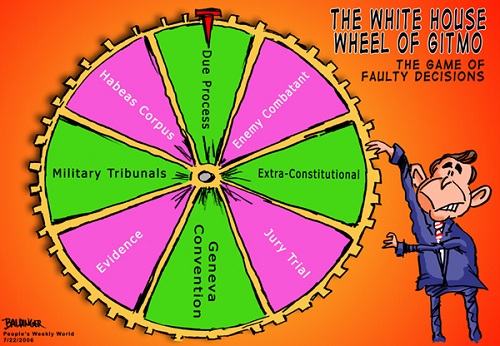 This cartoon highlights topics about which the Bush administration made decisions that violated the rights of GTMO detainees. Courtesy of David Baldinger. Available under a Creative Commons Attribution-NonCommercial-NoDerivs 2.5 license at http://www.dbaldinger.com/opinion_cartoons/second_page/wheel_of_gitmo.html.

“The conscious, deliberate decision to abandon the Geneva Conventions and the entire fiasco that is Guantánamo will undoubtedly be viewed by historians as an even more disgraceful chapter in our history.”  On June 19, 2008, Major David J.R. Frakt spoke these words during his argument for a pre-trial dismissal of a case against a Guantánamo detainee (http://www.law.harvard.edu/news/2009/02/frakt-closing-argument.pdf).   A look at what resulted from non-compliance with the Geneva Conventions shows that Americans need to consider the implications of their nation’s post-9/11 disregard for these significant treaties.

The 1949 Geneva Conventions, four treaties created during various conferences held in Geneva, Switzerland, were the first international standards of warfare.  The First Convention (1864) and Second Convention (1906) provided protection for wounded soldiers and medical personnel during wars on land and at sea, respectively.  The Third Convention (1929) outlined fair treatment of prisoners of war.  A 1949 meeting updated the first three Conventions and established protections for civilians under the Fourth Geneva Convention.  Today, 194 nations have ratified the Conventions (http://www.icrc.org/eng/war-and-law/treaties-customary-law/geneva-conventions/overview-geneva-conventions.htm).

All four Conventions contain a common Article 3 that extends their principles from declared wars between states to less traditional “non-international armed conflicts,” such as the United States’ war against terrorism.  However, as the “Wheel of Gitmo” cartoon suggests, President George W. Bush made “faulty decisions” about the Conventions’ applicability at GTMO.  His administration declared that neither al-Qaeda nor Taliban members qualified for the Geneva Conventions’ prisoner of war status.  Instead, they were “unlawful combatants” (http://articles.cnn.com/2002-02-07/us/ret.bush.detainees_1_taliban-fighters-taliban-detainees-unlawful-combatants?_s=PM:US).

Common Article 3 also states that judgments of such persons must be “pronounced by a regularly constituted court, affording all the judicial guarantees which are recognized as indispensable by civilized peoples.”  In 2006, the U.S. Supreme Court ruled in Hamdan v. Rumsfeld that the GTMO military commissions did not meet requirements set by the Geneva Conventions.  For example, the commissions allowed prosecutors to present evidence without the knowledge and presence of the defendant and defense counsel (Joseph C. Sweeney, “Guantanamo and U.S. Law,” Fordham International Law Journal 30, no. 3 [2006], 770, 773-774, which can be downloaded here).

Major Frakt’s statement implies that rejection of the Geneva Conventions will mark a single dark period in American history and not happen again.  However, as warfare continues to evolve, America may once again find itself wanting to circumvent international laws of war in the name of national security.  I do not consider a world in which powerful nations can sidestep the Geneva Conventions to be a safer world.  I hope that through examination of Guantánamo’s recent past, the GPMP exhibit will facilitate discussions about how to prevent future dismissals of the Geneva Conventions.