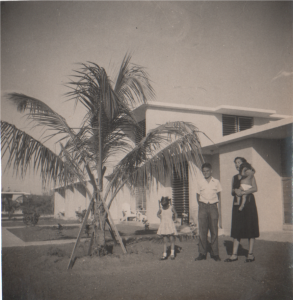 The Ward Family in Front of Their Quarters in Villamar, on the Guantánamo Naval Base of the 1950s

What’s the first thing that comes to mind when you hear the word “Guantanamo”? I’m guessing it’s not “Mayberry.” I wasn’t particularly aware of Guantanamo and its history before my involvement with the Guantanamo Public Memory Project, but in studying I’ve learned a lot more than just facts and timelines. I’m a part of the team at the University of North Carolina at Greensboro, focusing on the Guantanamo of the 1950s and 60s when the naval base in Guantanamo Bay was home not only to members of the US military and workers but also to many families. In some ways a glimpse of what Guantanamo was like is very much suited to a vintage televised sitcom: a small community of mid-20th-century Americana complete with squeaky-clean proms, Boy Scouts and a teen club. At the same time, this little slice of American-as-apple-pie was geographically located in Cuba, a portion of the globe where the tropical heat wasn’t the only thing with potential for making folks hot under the collar. There was always the distinct possibility of tensions boiling over between peoples of different classes, ethnicities, governmental philosophies and nationalities, most infamously so in the early 1960s’ Cuban Missile Crisis. In studying this place and time period I’d finish reading an account of swimming at the beach and the diplomacies of housekeeping and then pick up the next book to discover a treatise on the far-reaching effects of neo-colonialism.

Learning about Guantanamo has taught me much about looking at a time and place through multiple lenses, and seeing how many different voices are to be heard from every snapshot. There are no simple histories, and even in one place at one time there are many stories to be told. One of the many joys of the project is being able to not only read about several of those stories, but to hear some of them first-hand. I was given the opportunity to have a nice long conversation with someone who had grown up on the base, and I enjoyed very much hearing the tales that usually don’t make it to the history books. Personal accounts of personal happenings, which just so happened to be a part of History—isn’t that how things so often truly are? Listening and reading and learning about Guantanamo has shown me that even the most legendary moments of our recent history still included everyday tasks and common errors. Many elements, themes, and conflicts of that time are often still recognizable today; some things which were well-known and familiar to people then are foreign as the customs of another planet to me. I am still learning new stories and meanings, and how worthwhile it is to keep studying and talking with the past in all of its memorable unknowns and everyday glory.

Posted by Megan Coker – Museum Studies student at the University of North Carolina at Greensboro.

Thank you, Megan, for a chance to leave something for the future from my past. Your demeanor throughout the interview was extraordinarily pleasant, upbeat, inspiring and professional. Your experience, as illuminated above, is beautifully stated and also inspirational. I hope others can benefit from your revelations and be moved to open to the lessons from the past to present in similar fashion. Thanks again.