The Global States of America

For centuries America has used Guántanamo as an uncharted land to execute procedures that would otherwise be illegal in the states. Exploitation of Cuba’s location and resources is not a new idea. In the 1860’s American farmers relocated to Cuba around the time slavery had been abolished in hopes of making a lot of money through farming. 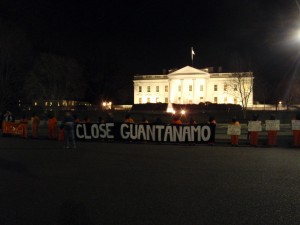 The controversy is still relevant today, as thousands of people protest for the closure of Guántanamo. Courtesy of Wikimedia Commons.

In July 1860, American vessels were spotted in Guántanamo participating in slave trade, while the larger picture focused on annexing the territory.  Again in 1895 the U.S.S. Columbia visited Guántanamo to conduct a geological survey without permission from Spanish officials. The Spanish Crown was not happy, mostly because the U.S. State Department claimed that their ship was supposed to be in Nicaragua, and it ended up in Guántanamo by error, which was obviously not true, given U.S. familiarity with the site.

Until this point, residents of Cuba had been urging and waiting for Spain’s promises of liberal reform that could ultimately improve their lives. When it was realized that the U.S. had been intervening extensively in the country, Spain decided that something needed to happen.  The U.S. once had the power to seize Cuba but never did because the government officials believed that Spain would be able to maintain law in a manner similar to the U.S., while also allowing the commercial exploitation of the island. Thus, when Cuban War of Independence broke out and it appeared that Cuba was winning, the U.S. joined troops with Cuba and promised to grant them independence but then failed to do so. What did America have to do with Cuba’s independence? Obviously the U.S. was trying to monopolize the Western Hemisphere.  Quickly the conflict became the Spanish-American War. Cuba’s military commander Máximo Gómez mentioned in a diary entry that U.S. involvement prevented Spain and Cuba to part respectfully. Cuba was left looking weak and Spain was left defeated, while America appeared to be heroic for stepping in.

We can see this same trend today as the U.S. continues to be involved in the politics of other countries.  The issue of control has been happening throughout history: England, France and Spain have conquered other peoples. Guántanamo is an interesting example because we never fully took complete control. We are stuck with our hands permanently in the cookie jar, so to speak, even though they shouldn’t be there in the first place. Ratified in 1903, the Platt Amendment allowed the U.S. to stay on their naval base in Guántanamo, although they never really left after the Spanish-American War. In the Platt Amendment, it is stated that Cuba would approve the acts of the U.S. military government, giving the U.S. freedom to do whatever they would like to do in regards to their military practices. This brings us to present day. Has much really changed in our long, conquering history?

Posted by Fran Nelson, Undergraduate at the University of Minnesota – Twin Cities