Creating Local Connections: How Supermax Prisons in the U.S. can Foster Dialogue on Guantánamo 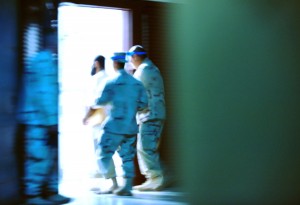 Why does Guantánamo matter? Why should Guantánamo matter to me?  How do we create dialogue on Guantánamo among an audience who may not be able to answer these questions? These are just a few of the issues I have been wrestling with since I started working on the Guantánamo Public Memory Project (GPMP). It is my opinion that a majority of Americans ignore the issues surrounding the site since it is so invisible to the public. One way in which our class has chosen to combat this perception is by creating local connections that can help foster an increased personal investment in the issues we wish to address as well as inspire visitor dialogue and action.

One of the connections I have explored on a local and national level is the use of Supermax Prisons and Communication Management Units (CMU) as parallels to the post-9/11 detainment facilities at Guantánamo. As a resident of Indianapolis, Indiana I live about an hour away from one of these Supermax prisons which is located in Terre Haute. This facility is not only a Supermax prison but a CMU, or a facility designed to isolate certain “high-risk” inmates from the general prison population (For a more detailed description of CMUs see the Center for Constitutional Rights website here). Many similarities have been draw between the federal prison in Terre Haute and Guantánamo to the point in which the Indiana facility has been nicknamed “Little Gitmo.”

So what are the similarities that exist? Shockingly the Center for Constitutional Rights (CCR) estimates that 66 to 72 percent of the inmates at the Terre Haute CMU are Muslim and that a portion of these Muslim detainees have only been convicted of low-level crimes, such as donating to a charity abroad without a license, which hardly earns them the status of “high-risk” inmates. Some of the inmates held in the CMU also feel that they were wrongly convicted. One prisoner, Yassin Aref, was found guilty of conspiracy to provide material support to a terrorist organization through a controversial under-c0ver FBI operation made possible by the Patriot Act. As an Imam––a person who leads a muslim community in prayer––for a New York mosque, he notarized a loan which was to be used to buy weapons in a supposed terrorist attack; however, it is extremely unclear as to whether or not Aref actually knew how the money would be spent (for the full story on Yassin Aref read New York magazine’s ‘Little Gitmo’ article  here). Many past detainees of Guantánamo also feel that they were held under false pretenses and were denied council and a fair trial. Finally, confinement conditions for inmates at the CMU and detainees at Guantánamo are strikingly similar. Extended periods of solitary confinement and the stripping away of family, language, and religious identity are hallmarks of both facilities.

Through the examination of the Terre Haute CMU I have personally developed a greater understanding of the conditions detainees at Guantánamo must face. The fact that issues of detainment extend beyond the boundaries of this small military base on Cuba and into a community that is literally in my back yard has made me want to engage in conversation about how the prison and legal system in the U.S. operates. It is my hope that through local and national connections such as the ones presented here, our audience will develop a personal investment in the issues that surround Guantánamo and be moved to participate in the important dialogue we are initiating.

3 Comments to: Creating Local Connections: How Supermax Prisons in the U.S. can Foster Dialogue on Guantánamo

Thank you for your post Stephanie. I like the connection you draw between the state of prisoners at Guantanamo and a local Supermax prison, especially how racial profiling continues to inform its resident population and how these issues pass largely unnoticed or with indifference in the minds of the larger population due in part to geographic distance and detainment those prisoners on the margins of society.

I would even extend your comparison of the prison at Guantanamo to our prison system at large and mass incarceration under the War on Drugs. Standard prisons in the US house a disproportionate number of nonwhite inmates with staggering 1/3 of all black males in the US currently under control of the criminal justice system (Michelle Alexander, The New Jim Crow: Mass Incarceration in the Age of Colorblindness (New York: The New Press, 2010) 9). While studies have shown that white and nonwhites use drugs at similar rates, black men in some states are admitted on drug charges at rates twenty to fifty times that of white men (Alexander 7). Upon reentry into society, these individuals carry the label and stigma of “criminal,” a new sort of second-class citizenship that forbids political participation in voting and limits opportunities for employment, often leading the same individuals to return to the environments that led them to deal or use drugs in the first place. Furthermore, the notion that we live in an era “post-racism” and in a society with equal opportunities for all, permits us to overlook with indifference the legacies of institutional discrimination. Coupled with the fact that most prisons are tucked away in rural America, the rest of the population can continue in their day-to-day lives without thinking about these individuals (Alexander 190). Then when we do see them, perhaps on a road-maintenance crew, the label “criminal” encourages us to harbor some form of resentment for them without even knowing their story. If we want to reduce crime, I think monies that support prisons for drug users might be better used for rehabilitation programs or improving health and education systems in low-income neighborhoods.

While the comparison is not perfect, I think critical analysis of how fears (terrorism or drugs) and geographic marginality (Guantanamo in Cuba or prisons in rural US towns) allow us to overlook systematic discrimination and human rights issues. Food for thought.