Visions for the Future of Guantánamo

In the course of doing research on whether the Guantánamo base can be closed, and if so, what to do with the space when the U.S. is no longer using it for Navy operations, the question of how to best use the site has become more difficult than I originally thought. At the beginning of the research the “what now” seemed like a question of planning, investment, and design—albeit one more politically fraught than the typical development project, due to the multiple nations’ interests that are involved. However, the more I delve into the project, the more I question the inclination to repurpose the space right away simply because it will be unoccupied and available for use.

This concern goes beyond the lingering problem of whether Cuba or the US would ultimately have jurisdiction on the land that the base now occupies. The more I learn about the conditions on the base during its operations, from the racial and economic injustices the Cuban and other Caribbean workers endured on a daily basis, to the deliberately dismal conditions of Haitian refugee camps, and finally to the torture and unlawful detainment of enemy combatants after 9/11, the less I can envision a way to continue to use the space in a way that respects all of the groups who are economically and politically invested in it.

The visions for the future in the Guantánamo Bay area range from full-on resort based tourism to nature preserve to hospital to memorial and museum cataloguing the history and atrocities of the past. Some of these are obviously incompatible with properly honoring the memory and telling the true story about what happened in this place. However, for an area constantly being reinvented in the public image––one that is so steeped in propaganda and misinformation and a certain degree of mystery to the general public––the best option may be to let it rest for a period of time. We need to learn the history and the lasting impacts of the decisions that were made at GTMO and to reflect on what they mean. The groups affected by the camps, the barbed wire, the torture and the inequality can have some time to understand and to tell the rest of the world what Guantánamo Bay meant to them. Then, perhaps, it would be a better time to come up with proposals for the GTMO’s future use––when the new isn’t just being used to obscure the old, and when we could find a way to honor the past and move toward vision of the future. 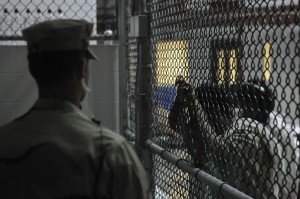 University of Minnesota –  Twin Cities is participating in the Guantánamo Public Memory Project‘s National Dialogue and Traveling Exhibit. Opening at NYU’s Kimmel Center for University Life Windows Gallery in December 2012 and traveling to 9 sites (and counting) across the country through at least 2014, the exhibit will explore GTMO’s history from US occupation in 1898 to today’s debates and visions for its future. The exhibit is being developed through a unique collaboration among a growing number of universities as a dialogue among their students, communities, and people with first-hand experience at GTMO.

One Comment to: Visions for the Future of Guantánamo

I agree that the acknowledgement of Guantanamo as a site of conflict requires time to unravel its complex history and that we must demand that the space itself takes a rest. Allowing it to stand as it is provides us time to understand the resonances and greater social implications of these turbulent histories beyond GTMO’s geographic boundaries. In underscoring this necessity of time, I realize that this is a crucial step in a dialogic process to truly engage more scholars, community activists to help in heightening awareness of GTMO’s history to a larger global platform. The remark on holding off on re-purposing the space has urged a sudden pause in our typical process of acting immediately. It made me think about the dangers of re-appropriating the space in a time where we still live in the shadow of 9/11. These sensitivities in many of the issues tied to Guantanamo has prompted me to think about what constitutes “public memory” in the case of Guantanamo where the history is shifting due to its many re-interpretations and uncertain future in the question of its sovereignty.

With regards to the creation of Guantanamo public memory, how much time must elapse before we consider a history as memory and how can we incorporate the ever-shifting present into the historical narrative / process of historical production? This post makes the very important point that we need to continue to engage ourselves in these questions first before inscribing further meaning to a space that is so politically rife with tension. With Guantanamo history, initiating dialogue can help us shape a vision and future for Guantanamo that is based on accurate perceptions from multiple vantage points. Further inquiry is fundamental to properly honoring the past and assigning the space its function as a site of consciousness.