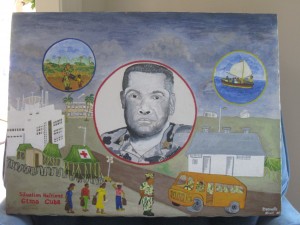 A painting by a person detained during the Haitian refugee crisis reflects the conditions on the base, and what it was like to have your fate debated by the U.S. military.

Zak was the pseudonym of Guantanamo’s Arab-American cultural advisor.  In 2008, Zak and the Joint Task Force initiated art classes at Guantanamo Bay detention camp as a way of controlling behavior.  Zak affirms, “…we want to keep their brains stimulated…once [the prisoners] are engaged and busy, they leave the guards alone…” The Prisoners are encouraged through art to cope with feelings of anger and isolation according to Tom Leonard’s 2008 article informs the public on their decision to use art as therapy. Not only was the art making effective therapy, but the images of paintings produced by detainees also provided a rare positive public relations opportunity for Camp X-Ray.

The use of art is not new to Guantanamo. Haitian and Cuban refugees, as well as current detainees, have produced art expressing their diverse experiences. During the Haitian Crisis in 1991 a painting signed by Albert Dronnett includes a portrait of Brigadier General George H. Walls Jr., who was appointed in November of 1991 to the post of Commanding General, Joint Task Force for Operation GTMO. Of note in the image is that the representations of the camp around Walls’ portrait depict largely peaceful scenes. The soldiers are shown helping students get onto a school bus, and they don’t appear to be armed. The Red Cross tent implies the availability of health care, of note given the prevalence of HIV testing on Haitians at Camp Bulkeley and its subsequent consequences for those who were refused entry to the U.S. due to their health status.  The painting portrays a humanitarian effort. Whether it was created as an expression of gratitude and optimism or made as a public relations tool, is difficult to tell given how little is known about art production from this time period.

Like the art being made by the current detainees, it is not hard to imagine the visions of sailboats and calm seas are expressions of yearning for freedom or memories of more peaceful times, but from our vantage point as curators of the arts of detention, we can only note that it speaks to the contrasts and contradictions that are Guantanamo. In the midst of the colorful scenes of the base in Dronnett’s painting is the tell tale coiled razor wire along the tents. Similarly, attorney Kristin Wilhelm, who currently represents eight Yemeni detainees held at Guantanamo, has criticized the post 9-11 art classes, arguing that they are “seven years too late.” Food strikes and detainee Adnan Latif’s recent death have shown the limits of art as therapy.

Included in Betsy Campisi’s dissertation, “Guantanamo: Trauma, Culture, and the Cuban Rafter Crisis of 1994 – 1996” is an analysis on the uses of art as a way to express and create an individual and collective identity, specifically for a group of people that have experienced suffering or trauma. Narrative, she says, plays an important role in this kind of artwork produced because it suggests objectifying distressing events helps people process trauma. However, drawing a narrative is not the only technique for processing traumatic events. There are multiple approaches to healing in art therapy (regardless of the presence of a practitioner-patient setting) where a narrative isn’t necessarily important. An individual may draw what they want to see; they might draw a dream; they might simply scribble just to express deep emotions that may not be otherwise expressed verbally.

While assessing the detainee’s body of artwork through a therapeutic analysis can be illuminating to study how people might cope with stress and trauma, interpreting the art itself for a linear narrative can be precarious. Was this art even created out of a trusting environment where the detainees felt like they could be completely expressive? I think it is very important that individuals beside the artist do not interpret the actual art produced in therapy. In doing so, arbitrary meanings and unintended narratives can be assigned to a drawing which doesn’t necessarily correlate with the artist’s intent – if there was an intent at all. It is often the case that the artist cannot immediately place their own intentional meaning and understanding of the exact narrative they’re creating. A great deal of sensitivity must be employed when approaching art such as this.

No one has ever charged the media with being too sensitive, however. History has shown us that media has been used as a powerful tool for politics; using the detainee’s artwork to show Guantanamo as a humanitarian effort is a solid piece of propagandistic evidence. The accounts of detainees at Guantanamo are indeed diverse; some people thought it was a positive experience that strengthened them while others felt unfairly imprisoned. However, using the drawings produced from art therapy to demonstrate any narrative should be off-limits.