The location of a space is not merely geographical, mappable via GPS and defined by a specific longitude and latitude or address. A space is also a concept, positioned within an ambiguous region (e.g. the South) or only in a perceptual region (e.g. the good old South), and is defined by integral sociopolitical characteristics. The latter kind of space is therefore not limited to a specific area, for instance at a naval station overseas, because its characteristics can be transplanted, by way of legal proceedings (or the lack thereof), to multiple areas at the same time.

Understanding the equivocal nature of a space is important to relating the U.S. naval station at Guantánamo Bay, Cuba, abroad to counter-terrorism Communications Management Units (or CMUs) in our federal prisons at home. Both are spaces that are located inside of the physical jurisdiction of the United States, and yet President Bush, the Department of Defense staff and other federal executives have argued in court that these spaces, and by extension their inmates, remain outside of the country’s legal protection.

Though some writers would disagree, I think that comparing GTMO to CMUs (which some call “Little Gitmos”), specifically the one in Terre Haute, Indiana, which is less than two hours away from where I live, is not only appropriate but also necessary in order to make connections between foreign policy models and their domestic manifestations. The Bush administration “quietly opened” the Terre Haute CMU in December 2006 without notification or an invitation to public discussion. Another CMU was similarly opened by the executive administration in Marion, Illinois, two years later. According to the Federal Bureau of Prisons (BOP) website, the CMU detention project “protect[s] the public” from certain “persons in the community,” the majority of whom are Muslim.

Inmates in the Terre Haute CMU are limited to weekly thirty-minute phone calls and monthly eight hour-long visits with loved ones through Plexiglas. The legality of such detainment was not challenged until 2010 in the case Aref v. Holder, in which inmates who were inexplicably transferred to CMUs filed suit against the BOP system, its officials and Attorney General Eric Holder. Like the GTMO plaintiffs and their representatives in landmark habeas corpus cases (e.g. Gherebi v. Bush, Rasul v. Bush, and Boumediene v. Bush), CMU plaintiffs argued that federal officials denied them the right to review and defend themselves against allegations of terrorist activities, and thus were denied the legal protections accorded to them by due process laws. 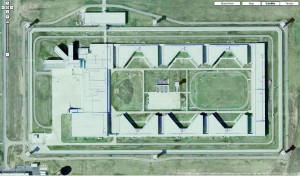 Courtesy http://cryptome.org/eyeball/gitmo-architect/gitmo-architect.htm. A Google Maps image of the Terre Haute Correctional Facility, the site of the first Communication Management Unit (or CMU) in the U.S.

Aref essentially contested the authority of the executive administration to set up and operate another Guantánamo, or conceivably law-less space, within which inmates are stripped of their civil rights and thus human dignity, in the United States. The legal precedents to the case were international, but its ramifications are domestic and consequently important to you and me as citizens of this country. For as the aforementioned federal lawsuits evidence, spaces are as transposable as the rights of those who live in them. Such are the paradoxes of Guantánamo, a legalized protocols-free space overseas that has been superimposed on federal detention centers here in the United States.

Indiana University Purdue University at Indianapolis is participating in the Guantánamo Public Memory Project‘s National Dialogue and Traveling Exhibit. Opening at NYU’s Kimmel Center for University Life Windows Gallery in December 2012 and traveling to 9 sites (and counting) across the country through at least 2014, the exhibit will explore GTMO’s history from US occupation in 1898 to today’s debates and visions for its future. The exhibit is being developed through a unique collaboration among a growing number of universities as a dialogue among their students, communities, and people with first-hand experience at GTMO.
Tags: Guantanamo Bay Naval Base, Human Rights, Torture, War on Terror
Tweet
Previous  |  Next