Where Does a Nation’s Power Reside?

“What is prestige? Is it the shadow of power or the substance of power? -John F. Kennedy 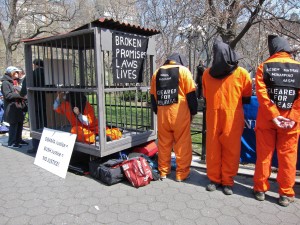 After the September 11th attacks and the subsequent War on Terror, the crux of the shadow power of America has resided at the US Naval station at Guantánamo Bay, Cuba. Some of the most poignant and affecting pictures that have come out in the post 9/11 era, including during the 2008 presidential election, show the protests there. Before being elected to office, then Senator Barack Obama stated that “As President, I will close Guantanamo, reject the Military Commissions Act and adhere to the Geneva Conventions. Our Constitution and our Uniform Code of Military Justice provide a framework for dealing with the terrorists.” Nearly four years after he was elected to office, Guantánamo Bay remains a place where the United States sends those people suspected of fighting against it in the “War on Terror.”

The pictures that have become most synonymous with the prison camp show the prisoners in orange jump suits while in cages outside. These pictures, reveal the way in which the prisoners are treated, have sparked considerable backlash and helped to galvanize the movement to close the prison.

The picture that accompanies my post sticks with me because, throughout its moderately long history, the United States has been in possession of Guantánamo Bay, even when there have been attempts to close, or at least reconfigure, it nearly always comes back to be a sign of American dominance. When President Obama vowed to close the prison within the first year of his presidency, he surely had to know at least something of the place’s history. He had to have known the difficulty of closing something seen by many to be a beacon, in the way that we as Americans, that we are to remain free from the violence associated with September 11. What is it about such a small, seemingly insignificant site that makes it so integral to the American foreign policy apparatus?

Pictures like this one suggest an important response to the question: secrecy. The invisible enemy clad in shackles and an orange jumpsuit, face hidden from view, becomes a specter in the imagination. We, as the public, can’t know the unearthly damage that these men could do. It is fear and the need to feel safe that dictates that because of this fear we could surely not transfer the prisoners to American soil. We are afraid of both our ability to properly detain them on American soil and to give them trials in the legal system. Guantánamo Bay, Cuba remains a symbol of America appearing to be strong while at the same time exposing some of its biggest insecurities. The President vowed to close the base within the first year of his presidency. This picture shows a protest three years after his election. If there is to be a new beginning at Guantánamo Bay how will it rectify the past? Will it acknowledge the men deemed fit for transfer and yet still sit there? Or, will it acknowledge the refugees also surrounded by barbed wire? Will it become just another vacation spot, its history washed away by pools and resorts?

The University of Minnesota is participating in the Guantánamo Public Memory Project‘s National Dialogue and Traveling Exhibit. Opening at NYU’s Kimmel Center for University Life Windows Gallery in December 2012 and traveling to 9 sites (and counting) across the country through at least 2014, the exhibit will explore GTMO’s history from US occupation in 1898 to today’s debates and visions for its future. The exhibit is being developed through a unique collaboration among a growing number of universities as a dialogue among their students, communities, and people with first-hand experience at GTMO.
Tags: Guantanamo Bay Naval Base, War on Terror
Tweet
Previous  |  Next