“I’ll be home for Christmas” 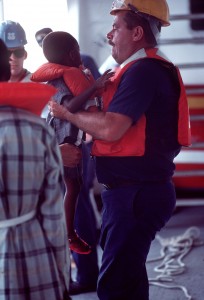 Off the coast of Haiti (June 30)–BM1 Tom Stanford helps a young Haitian boy into a RHI (rigid hull inflatable) boat on the Coast Guard Cutter Dauntless (WMEC 624) as the refugees are sent back to Haiti. USCG photo by PA2 David M. Santos

How often are we subjected to the harsh criticisms of Guantanamo Bay? News of the base consists of much of the same: detainees, imperialist presence, and torture. But what of the people who are stationed there? What do we know of them, their experiences, and their lives? Is GTMO only filled with hardened soldiers inflicting injustices on the detained? Often is the veil of GTMO opaque, yet it is my wish to unmask this gray area by seeking humanity through examining the emotions of a typical human event experienced by most, if not all, Christmas.

I bet if I close my eyes and try really hard, I can remember my first Christmas. I bet anyone could at least remember their first Christmas, or perhaps their favorite Christmas. For me, I can almost see my grandfather making breakfast, my mother making herself a cup of coffee, my grandmother smiling at me, and my sister grabbing me to come with her to open presents. As I write this blog, I cannot help but think about my family, and how I do not see them often, and how much I truly miss them. These emotions and experiences are what make us human.

Karen Usiak twice called Guantanamo Bay her home, once while stationed there from 1987-1990 and as a civilian from 1992-1994. Much to her disbelief, her family had no idea there was a base on Cuba. As the interview continued, she laughed a little as she began to tell her next story, and in this case controversy gave way to love. Mrs. Usiak met her special someone on base, began dating, and soon married. Her first Christmas as a married woman occurred while in Guantanamo Bay. She claimed she missed the weather, sadly had no tree and she found her spirits a little down. In an effort to lift her Christmas spirit, her husband found an ad in the paper that announced a Christmas tree for sale because from a family moving after the holidays. The family was willing to part with the tree after Christmas, but her husband convinced them to sell. He bought the tree on Christmas Eve, but decorations on the base were scarce so late in the holiday. This would not deter happiness on their first Christmas. They gathered Hawaiian leis, tore them apart and stapled them together for garland. They gathered anything else they could and gave the tree its beauty, and she found her Christmas spirit. Her statement that followed, “It was one of the coolest Christmas tree’s we ever had.”

Another man named David Pruett also describes his Christmas experience in Guantanamo Bay.  He was on station from February 1962 to January 1963. Mr. Pruett was twenty-two years old when he was on base, lived in the barracks, worked in the film library, and his divisional officer was a “poor little rich boy that was doing his bit in the Navy, like the Kennedy’s.” He was present in Guantanamo Bay through the Cuban Missile Crisis, and “had no idea the Cuban crisis was fixing to occur.” However, his story never made mainstream television or radio. Often, in order to boost morale and have fun, the base would host concerts, and during David Pruett’s time in Guantanamo Bay, Jackie Gleason even appeared on the base and filmed his Christmas show there. He then began to tell a story about a man who sang the song, “I’ll Be Home for Christmas.” He started to choke up, and admittedly, so did I. He said little more of the song, and Christmas, but did he have to say more? Mr. Pruett’s words, voice, and crackle say enough.

These two particular stories, which were collected by those at the University of West Florida and those participating in the Guantanamo Bay Memory Project, led by Dr. Patrick Moore, remind me of family, of friends, and of Christmas. When you spend your first Christmas with the one you love, nothing matters much except for a small tree, perhaps minimally decorated, yet worthy of a memory to never be forgotten. Mr. Pruett crackled when he mentioned the Christmas song most have all heard and know. I cannot help to see the humanity through the black veil placed over Guantanamo Bay. Humanity is often forgotten with the massive waves of negative publicity of the base, yet through stories of family oriented social gatherings, such as Christmas, the veil may be more transparent than previously believed. I could not help to gain a small sense of what these two people and families experienced. After hearing the crackling voice of Mr. Pruett, how can we not all wish to be home for Christmas?

Posted by Charles Danzey: Graduate Student at the University of West Florida

The University of West Florida is participating in the Guantánamo Public Memory Project‘s National Dialogue and Traveling Exhibit. Opening at NYU’s Kimmel Center for University Life Windows Gallery in December 2012 and traveling to 9 sites (and counting) across the country through at least 2014, the exhibit will explore GTMO’s history from US occupation in 1898 to today’s debates and visions for its future. The exhibit is being developed through a unique collaboration among a growing number of universities as a dialogue among their students, communities, and people with first-hand experience at GTMO.
Tags: Base Life, Oral History
Tweet

Guantánamo’s peculiar location had always intrigued me. I could never comprehend how the United States was able to have a base in the middle of an island that is considered enemy territory. While working on this project, I finally grasped Guantanamo’s unique history and began to understand how the United States had acquired the base. As I continued reading, I was surprised to learn that there were American families living on the base.
Growing up in the era of 9/11 Guantánamo has always been used pejoratively. It was hard for me to imagine that Guantánamo could be considered someone’s home. As you mentioned, “humanity is often forgotten with the massive waves of negative publicity of the base.” Your post really helped me envision some of the people who called Guantánamo home. I was instantly drawn to the couple who was celebrating their first Christmas together. Their story showed the softer side of Guantánamo (a side that is often overlooked). I did like that you used a holiday snapshot because I could easily relate to the holiday traditions of the base inhabitants. It did make me wonder about what it was like to spend the holidays on the base. Were stateside families allowed to visit the base during the holidays and how did living on the base affected uniquely American holidays such as the Fourth of July? I would be interested in hearing more about the oral histories that your university conducted because they add dimension to the story of Guantánamo.