Public Memory and the History of the McRib

Though the existence of the base has been public knowledge since the United States and Cuba signed the lease to the 45-square mile land parcel in 1903, the base falls in-and-out of America’s collective conscious as if it were a natural disaster hitting the third world. We become fully aware and interested in these unfamiliar places when something dramatic happens, but they become all but forgotten once the telethon ends and the last pop-star leaves the scene.

It is astounding how little we, as the American public, discuss Guantánamo once it drops out of the public eye, which is currently situated on the face of a 24-hour news cycle. That is not to say that the American public has completely forgotten about Guantánamo; it’s that there are so few people having meaningful conversations about it that their voices are drowned out by yowling from the “serious journalists” reporting on Celebrity B-83’s Twitter account.

Does blame for our lack of public memory rest squarely on the media? No. To quote Paul Weller “The public wants what the public gets” and we usually ask for things to be as simple as possible, not because we are idiots, but because those who we tend to listen to have been speaking down at us for so long that when the intricacies of a situation are presented, we do not know how to react.

It’s simpler for the media to do a story about the history of the McRib than a story about why we have a military base on Cuban soil. Whereas most people have a McDonalds in their town, Guantánamo is a place that most of us will probably never visit. Though Cuba is located in our hemisphere, due to bad relations between Washington and Havana, it still casts an otherworldly shadow. It’s difficult for even the most imaginative among us to picture what life there is like, on either side of the well-guarded fence, while it’s easier for most of us to relate to a sandwich.

For an issue as large as Guantánamo Bay there is no right or wrong answer; it is complicated, and expecting the public or the media to be able to devote the time and thought needed for insight and introspection on the issue is unfeasible and completely predictable. To treat Guantánamo with such simplicity would be a disservice to those trying to keep it within the public memory. It’s an internment camp.

IT’S NOT THE MCRIB! 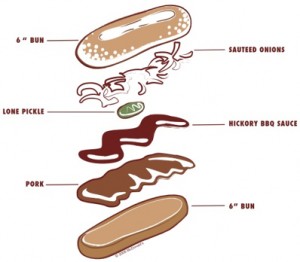 Much like the McCrib, the ingredients that went into making Guantánamo Bay are multi-layered and do not go well with one another.

The University of Minnesota is participating in the Guantánamo Public Memory Project‘s National Dialogue and Traveling Exhibit. Opening at NYU’s Kimmel Center for University Life Windows Gallery in December 2012 and traveling to 9 sites (and counting) across the country through at least 2014, the exhibit will explore GTMO’s history from US occupation in 1898 to today’s debates and visions for its future. The exhibit is being developed through a unique collaboration among a growing number of universities as a dialogue among their students, communities, and people with first-hand experience at GTMO.
Tags: Art, Human Rights, Torture, War on Terror
Tweet

One Comment to: Public Memory and the History of the McRib

This is a wonderful post and I completely agree with you. I do, however, think that another factor may contribute to our collective lack of attention to Guantánamo – burnout. My closest friends are a group of people that one might assume would discuss the use of torture on suspected terrorists when the topic of conversation turns to politics. More than one of us has fought in the war in Afghanistan. One of us is an Afghani who is in America because of a fatwa issued against him for being an atheist. Many of us have worked with organizations that actively voice opposition to the use of torture as an interrogation technique. Despite all this, I can count the number of times we’ve discussed Guantánamo, or even the War on Terror in general, on one hand.

The first detainees arrived in Guantánamo a few weeks after my 18th birthday; the issue of torture and the question of what war looks like when it’s being fought against terrorists and not nation-states has been at the political forefront for my entire adult life. I am concerned that my generation has been desensitized to these issues due to constant exposure; we feel like we’ve heard every opinion there is to hear on the matter and that every recommended solution to the problem has been argued into the ground. The politicians in charge appear to keep the same stance on the matter, regardless of what side of the aisle they are on, and all the protests and debates in the world don’t seem to matter. Whether the media is paying attention or not, whether the subject is discussed simplistically or in great detail, the debate over the use of torture is always there, like background noise. And, like background noise, it is all too easy to just ignore it.

– Posted by Brandie Cline – M.A. Candidate at The University of North Carolina at Greensboro