Concentration camp: A camp where persons (as prisoners of war, political prisoners, or refugees) are detained or confined; Internment center by a government to confine political prisoners or members of national or minority groups for reasons of state security, exploitation or punishment.

Concentration camps in the Western world, I thought, were sites of human rights violations that were abandoned in the early 20th century––rendered extent with the demise of dictators like Stalin and Hitler. Many would be surprised,as I was, to learn that there exists a contemporary site that has been used and reused by the United States to detain people without legal protections.

For eighteen months, from 1991 to June 1993, more than 250 Haitian refugees were detained in a makeshift tent town on the United States Naval Base at Guantánamo Bay. Sometimes called the Guantánamo HIV Camp, it was used to house HIV positive Haitians that were fleeing political upheaval in their home country. Boats filled with Haitians were redirected to the refugee-processing camp on the Bay where, under a 1987 immigration law, HIV-positive immigrants were barred from entering the country.

The INS (Immigration and Naturalization Service) tested each refugee for HIV/AIDS before allowing them to pass in to the country and apply for political asylum. With no regard to public health statutes or common human decency, the afflicted refugees were crowded into a barracks surrounded by armed United States Marines. There they lived in squalor for months with no privacy and no protection from the infectious diseases that their immune systems were too weak to battle. Despite warnings from other government departments about the potential impacts of an infectious disease on the camp, the INS refused to close the camp or treat the sickest of inmates. 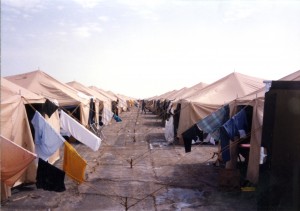 The runway of McAlla airfield was a hot and dangerous place to live as a refugee detained at Guantánamo Bay, Cuba. Photo courtesy of Holly Ackerman.

It wasn’t until a June 8, 1993 United States District Court ruling declared the camp unconstitutional, that a few of the imprisoned refugees were allowed to enter the United States–most were repatriated. The legal battle was waged by a “grassroots” campaign that advocated for these men, women, and children by bringing their  cause before U.S. courts.

To me, what was most striking about the detaining of Haitian refugees was the treatment that they received while they were imprisoned. These political escapees were treated as though they had committed atrocities against the United States. A section from Liz Ratner’s paper in The Nation titled, “The Legacy of Guantánamo,” gives a fabulous example of the inhumane treatment:

When asked by reporters why it (INS) ignored the refugees’ medical plight, an INS spokesman . . . responded with unrepentant candor: “They’re going to die anyway, aren’t they?” Such brutal disregard typified the refugees’ treatment at Guantánamo . . . Under their watch, the refugees endured hunger and humiliation, and a strict curfew, and were manipulated into Depo-Provera injections (a form of female birth control with potentially serious side-effects).

The details of the forced shots of birth control evokes the memory of Nazi medical testing during the Holocaust and for this reason alone, the refugee camp on Guantánamo could be considered a concentration camp. When combined with the general inhumane treatment, poor living conditions and lack discretion on the part of the United States Government, the Haitian Refugee Camp located on Guantánamo Bay was most certainly a modern day concentration camp.

The University of Minnesota – Twin Cities is participating in the Guantánamo Public Memory Project‘s National Dialogue and Traveling Exhibit. Opening at NYU’s Kimmel Center for University Life Windows Gallery in December 2012 and traveling to 9 sites (and counting) across the country through at least 2014, the exhibit will explore GTMO’s history from US occupation in 1898 to today’s debates and visions for its future. The exhibit is being developed through a unique collaboration among a growing number of universities as a dialogue among their students, communities, and people with first-hand experience at GTMO.
Tags: Guantanamo Bay Naval Base, Haitian Refugees, Human Rights
Tweet

7 Comments to: An American Concentration Camp

I definitely agree that the Haitian Refugee Camp was a concentration camp.The treatment of the Haitians is definitely one of the things that struck and surprised me the most this semester, especially as this happened in my lifetime. The United States likes to portray itself as a moral authority in the world fighting for human rights and justice, and while this country has done some wonderful things, we have also done some truly terrible things and this definitely counts. Having had relatives that were held in the Japanese Concentration Camps during World War II this disgusts me especially that the United States didn’t learn anything from their past actions.

I spent 6 months as the commander of Camp Bulkely. You portrayal of the camp is inacurrate and sensationalized. Very poor journalism.

Hi Ronald, please bear in mind that these blog posts are reflections by students that participate in our project, and make no claims to be journalism. We welcome opinions and stories from diverse perspectives. If you’d ever like to share your story with us, please get in touch.

I think to call it a “concentration camp” is a mistake. While no one can deny that human rights were violated and horrible conditions existed, the term “concentration camp” is inappropriately used here. It is a powerful phrase that invokes memories of Nazi Germany and thoughts of gas chambers. Simply because a situation is terrible does not mean that it is equal to the slaughter and death of six million lives, not to mention the horrible experiments conducted on those people. By calling it a concentration camp is to equate American military with SS soldiers, a stretch by anyone’s reasoning. This term means so much more than a grouping of people within in an area; this term is endowed with specific meaning and imagery. We need to remember how both Haitians and personnel tried to make this place habitable. “A Skillful Show of Strength” explained how the Marines and Army made requests for more supplies and efforts were made to improve water supply.General Kinder made sincere efforts to improve the camp, like putting Haitians in charge of their own meals. As some of the oral interviews with aid workers indicate, most soldiers were young men who had no idea how to handle this situation and had no training to deal with housing thousands of refugees for an indeterminate amount of time. One aid worker recalled that if a soldier was mistreating a Haitian, the witness could mention it to a higher-up and the soldier was reprimanded. Calling it a” concentration camp” belittles both the efforts of the Haitians and the people working to free them. In “Storming the Court”, Lisa Daugaard, a Yale student, expected the Haitians to be passive and waiting for salvation; instead, she found a strong group of people who were determined to make the course of their lives matter, such as the hunger strike. Very few Nazis tried to improve camp conditions, or give their prisoners lawyers. Refugee camps at Guantanamo Bay were highly politicized, and therefore complex. Not all of the military and Haitian inhabitants were villains, nor were they all were heroes. They were humans dealing with an ignorant government policy that placed people in a horrible situation. But in the end, people on both sides of the barbed fence wanted a better solution, not a “final solution.” And that makes all the difference.

Steven, I understand what you are trying to do, shed light on the abuses of the government. I agree that by your definition posted, Nazi camps, internment camps, gulags, and Haiti are all concentration camps. Yet I think there is more to it; perhaps it is a battle between definition and meaning. The definition is clear, the meaning is not. I believe “concentration camp” has become largely associated with Nazi cruelty and the goal of those camps was death, by burning, by grueling work, by “disappearance”, etc. Those camps were built to kill people. I believe that the real difference between the Haiti camp and a Nazi Germany camp is the end goal: that Guantanamo Bay was not set out to kill people. Perhaps it could have eventually become that, but the point of my post was that unlike gulags and death camps, Haiti was an unfortunate result of a racist policy that military personnel, thrust into a humanitarian situation, tried to make the best of it, Some men succeeded at it better than others, but deportation rather than death was the preferred method of making people leave the camp.
I suppose that was my goal in writing that first response was to remind that people on both sides of the fence did not always know what was going on and that military men, like Gen. Kinder, honestly tried to improve conditions for the Haitians. I think the Haitian policy was built on prejudice and racism, much like the Japanese internment camps, and while both were a “concentration camp” in that they lived in a concentrated area, they were not “concentration camps” that resulted in stealing gold teeth from burned skulls. The imagery provoked from that phrase is larger than its actual definition.

Guantanamo is a result of the Spanish-American war. The use of it to house suspected terrorists and Haitian refugees was a serious violation of basic human rights created by a deliberate attempt to create panic and feat following 9/11.
Having said that I heard Otto Strasser speak in the 1970’s and having undertaken a graduate study in the Third Reich, I think your conclusions are far reaching based on available evidence. True, we must be very respectful of other’s rights, but the works of Primo Levi, books such as “bloodlands…” and Mendelsohn’s ( I believe I have that correct) search for the lost members of his family in eastern Europe evince a process of extermination that nothings can compare with. Ask any survivors of the Holocaust, there are few left, of their experiences.
The Japanese internment camps were a huge mistake by a frightened populace in the immediate after shock of Pearl Harbor. I do not deny they were wrong as they were based on the physical characteristics of Asians as opposed to Europeans and the denial of due process. . You cannot include America is inherently racist as long as there is nationalism and differing perspectives in the world (i.e. Buddhism, Hinduism, Islam,…). The Balkan war must not be forgotten for the example of modern day concentration camps constructed for near genocidal purposes. It is a far better example of modern day camps than Guantanamo.
We currently work with a child support organization in Haiti and support two children. We would love to visit them, but the support of them does not allow for the extra expense of travel. Some of the issues you enumerate could be resolved by a sincere, caring, effort by non-profit organizations (Some have done a great deal).