Beginning in 1895, Cuban revolutionaries began a war against Spain, their colonial power, in an attempt to become an independent nation. After having organized a new government, written a new constitution, and brought Spain to the brink of defeat, Cuba welcomed the United States’ entrance into the war on the revolutionary side in 1898. Together, Cuba and the US defeated Spain. To this day, in the United States this war is most commonly known as the Spanish-American War. Wait a second… What happened to Cuba? 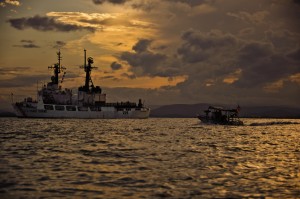 Noting its erasure from the historical record, in 1945 the Cuban national congress voted to refer to the war as the “Spanish-Cuban-American War” in all official records.[1] After all, each of the three groups had participated in the war, which had been fought on Cuban ground and for the freedom of the Cuban people. During the war, eastern Cuba, where Guantanamo Bay is located, was the seat of revolutionary Cuba. Many of these revolutionaries drew on rhetoric from the American Revolutionary War in order to draw parallels between their fight and the American colonists’ fight in 1776.  Their army was small and somewhat ragged, as had been George Washington’s army, but they fought bravely “‘like the heroes of Saratoga and Yorktown.[2]’” By identifying their cause with that of the American colonists, and their battlefields with the battlefields of New York, the Cuban revolutionaries adopted these metaphors in order to label their war as a fight for freedom and independence.

Although popular sentiment in the US supported the Cuban cause, the American government ultimately had different aims than Cuba. Obtaining a naval base to use as a coaling station at Guantanamo Bay made economic and geographic sense for the US to become a major presence in Latin America. Thus, against the wishes of the Cubans, the US refused to pull the military out of Cuba until it had been granted the base, and the right to intervene militarily in Cuba in order to help Cuba preserve its independence. According to Amy Kaplan, professor of English at the University of Pennsylvania, with “this logic of equating intervention with protection, Cuba’s independence becomes dependent on the U.S. right to violate its autonomy.”[3]

These provisions, contained within the Platt Amendment of 1901, diminished the idea of “Cuba Libre,” and have had lasting consequences for GTMO. The Cubans’ revolutionary rhetoric has not had the same lasting impact on the physical landscape, and yet I believe it is an important piece of the war because it reminds us – Cubans, Americans, and the international community at large – that the United States has served both as an inspiration in wars of freedom and independence, and as a partial foil to the revolutionaries’ purpose. In order to understand fully the causes and consequences of any conflict – past or present – it is necessary to label correctly the conflict itself and the aims of the participating parties. If, in conversations of GTMO’s various incarnations, we identify all of the participants involved, and the motives driving all sides, we will better understand the possible decisions to be made in each story.

I think American sources referring to it as just Spanish-American may have something to do with the focus (or lack of it) in textbooks and other documents on the overall war against Spain, including the Philippines and smaller territories. While the Cuban War of Independence (as I have seen it called) had been going on for a while, the United States expanded it to include much of Spain’s overseas holdings. Spain seems to have considered it possible that the United States might try to attack the Spanish homeland; witness the withdrawal of most of the advanced naval units back home, leaving obsolete ships to combat the American fleets. Perhaps the expansion of hostilities could be considered a ‘Spanish-American’ War.
On the other hand, the probability that the Cubans were shortly to evict the Spanish from their land speaks strongly to the Cuban contribution to the global conflict. Also, had the United States not intervened, and the Cubans gained independence for themselves, it may have precipitated the loss of the other colonies through independence movements anyway (similar to the cascade of independence movements after World War 2).
It is unfortunate that our country has continued to take credit for the liberation, and that it refuses Cuban input on the future of Guantanamo Bay (perhaps partially for this reason). It seems that actions such as these make any dialogue fairly difficult. Hopefully, as time passes, we (Americans) will reconsider the naming of this (and perhaps some other) wars. Good post, by the way.