The Historical Production of Silence at Guantánamo

It is perhaps fitting that this post is being written on the day memorialized as the “discovery” of the New World by Christopher Columbus. The celebration of Columbus’ landing has less to do with historical truth and is, instead, an essential cornerstone in the construction of the narrative of American exceptionalism. Haitian scholar Michael-Rolph Trouillot, in his seminal work Silencing the Past: Power and the Production of History (1997), prefers to use the term “Castillian invasion of the Bahamas” as opposed to “discovery” when referring to Columbus’ voyage. His decision to rephrase the event resonates with his firm belief that “names set up a field of power,” often concealing a particular political purpose. 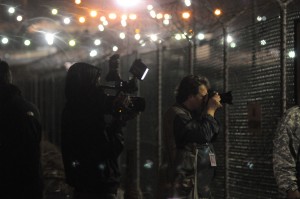 The media blockade that has been associated with Guantánamo under the War on Terror––the policy that journalists and photographers have very limited access to the site through a guided tour of the least utilized facilities––is but one chapter in the longer story on how the U.S. government has worked to silence dissent. Photo courtesy of Department of Defense

In a similar vein, we learned in our reading of Amy Kaplan’s “Where is Guantánamo?” that there was a serious debate within U.S. Courts on whether to term the thousands of Haitians fleeing their country, after the 1991 coup deposed Aristide’s democratically elected government, as either economic or political refugees. Legally conceptualizing the Haitian “boat people” simply as seeking economic opportunity in the U.S. abjures the federal government from responsibilities to harbor political refugees as stipulated by the 1951 Geneva Convention. Despite overwhelming evidence from media reports and other sources of political repression occurring in the post-Aristide military regime, the U.S. judiciary system placed most fleeing Haitians under the category of economic refugees. This allowed the INS to more quickly process Haitians placed in GTMO and, in spite of protests from detained Haitians fearing violent reprisal, send them back to Port-Au-Prince. The ability to categorize, exclude and apply a generalized condition to a group of people is directly tied in to power relations and reflects the politics of empire. Additionally, the blanket depiction of Haitians as purely economic refugees flat-out denies or, rather, silences the legitimacy of the experience of pro-Aristide refugees fleeing Haiti out of fear and suffering.

When we first began researching our topic, the other four members of our group and I were unaware that GTMO was once used as a politically ambiguous holding center for thousands of Haitian refugees and, for a much longer period of time, the several hundred of those refugees found to be HIV-positive. Our group’s first ideas on how to depict the situation of Haitian refugees in GTMO, more or less, mirrored the narrative I’ve provided in the above paragraphs- one focused on the fierce, imperialist streak in U.S. policy and the various silences produced thereof. In doing so, however, we realized we’d be creating a different set of silences that critically neglects the experience and voices of different groups of Haitians detained at GTMO. Motivated by Trouillot’s expressed purpose in writing Silencing the Past to “trace the lines of power,” we found it beneficial to not only tell a story of Haitians being excluded and dehumanized by the U.S. but also one that illuminates struggle and protest from Haitians confined within the boundaries of Camp Bulkeley. To highlight resistance is, in a sense, a very small yet significant way to counter narratives provided from the standpoint of an oppressor and, hopefully, fill in silenced gaps. One of the most daunting challenges of our project, though, is finding oral accounts from Haitians in our local community associated in some way to the detention of refugees held in GTMO.

3 Comments to: The Historical Production of Silence at Guantánamo

I’m glad you mention Trouillot’s work, one that should be foundational reading for all historians, students, and, in my opinion, everyone else.

In addition to historical silences, Trouillot’s discussion of how the present influences our feelings towards the past is integral to understanding historical and contemporary ambivalence towards Guantanamo and its many inhabitants. “Historical authenticity,” Trouillot writes, “resides not in the fidelity to an alleged past but in an honesty vis-à-vis the present as it represents the past.”

Nevertheless, un-silencing the past is difficult for scholars and the many publics alike because to acknowledge resistance, segregation, false imprisonment, bigotry, and torture (whether past or present) is to admit a flawed past that challenges traditional and oft-revered present-day narratives.

At UC, Riverside my fellow graduate students and I are focusing on civil liberties and national security post-9/11. We are facing challenges of ambivalence regarding the treatment of Gitmo’s current inhabitants, war on terror detainees.

Like the Haitian refugees and the other historical silences Trouillot discusses, a sense of “otherness” permeates this ambivalence. How do we as public historians get people the care about (or at least acknowledge) those they see as unlike them, the permanent “not-us”? How do we meaningfully engage in shared authority when the group we seek to include is imprisoned and—to many—invisible or, in the very least, “civically dead” as Ruth Wilson Gilmore discusses in The Golden Gulag?

Though there is difficulty in finding first-hand oral accounts, as you point out, the Guantanamo Public Memory Project is a worthy first step in making noise for those silenced.

Your blog post caught my eye by your opening sentence discussing Christopher Columbus’ “discovery” of America, one of my favorite misconstrued historical truths about this nation. Growing up as an Indian American in the United States, I am constantly correcting those who mislabel me as Native American, and often find myself confronting my identity. There is an artist who I was reminded of while reading your blog piece, Annu Palakunnathu Matthew (http://www.annumatthew.com/PortfolioAn_Indian_from_India%201/index.html), who explores the common misconception between Indian American and Native American. This idea of mislabeling different groups of people reminds me of your comparison to the Haitians at GTMO labeled as “economic refugees.” In post-9/11 GTMO, detainees were labeled as “enemy combatants” until the term was dropped in order to be “consistent with our values” and “governed by law,” as stated by Obama. Although current detainees are no longer labeled as “enemy combatants,” we have yet to see American values and laws incorporated at GTMO.
You also raise an interesting point about the creation of the “other” since America was “discovered.” America defines itself by its diverse and pluralistic society, only to contradict their identity in cases such as GTMO, where respect for different cultures and religions are completely disregarded, or even used against those detained at the base. There is a culture of fear surrounding the “other,” and this example set by the United States at GTMO contributes to the way people of color are treated in America, particularly Muslim Americans. I hope our project challenges this notion of the “other” created by the U.S. and informs us of the dangers of mislabeling groups of people.

Before working on the Guantanamo Memory Project, I only had the faintest knowledge of the Haitian refugee crisis, because at the time of the event I was just a young pup, so most of that knowledge consists of fuzzy memories from television news. The story of the Haitians and the U.S. courts not granting most of them political refugee status, forcing many of them to return to Haiti and certain death is one of two main things that I have been thinking about since beginning this project.
When we began the project, I expected that the events that were going to stick with me the most were going to be the ones that related to the torture of enemy combatants and suspected terrorists held there since 2002, as that was both the period that I am most familiar with and also encouraged my political leanings. But as we started to read more about the different eras and major events that took place at the base, what I found myself thinking most about was how difficult it was to find any thoughts from average Cuban citizens about what they think about events at Guantanamo and ideas for what they think should be done with the land were the United States decided to give it back.
Maybe the reason for this silence or perceived silence is the lack of sources written in the English language or my lack of ability able to speak Spanish; maybe there is no one asking the average citizen what they would do with Guantanamo Bay if it were returned or maybe I and the other 3 people in my group looking at Cuban attempts to close Guantanamo just overlooked the information; do they have the ability to present their thoughts and ideas or are they encouraged to not express their thoughts on the subject?
I understand from the perspective of the average Cuban citizens that it might make more sense to tow the official state line on Guantanamo, but this lack of silence on the subject is beginning to tell me more than their thoughts on the subject may have.

Posted by Maximillian Regan, an American Indian Studies and American Studies Major at the University of Minnesota.