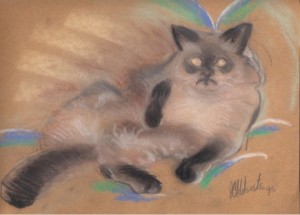 This 1995 drawing by a female soldier captures her cat. Photo courtesy of Siro del Castillo.

My first memories of Guantánamo are from the Haitian refugee crisis in the 1990s. As a kid I imagined how those people must have felt searching for a better life in the United States only to be held at this military base, uncertain of when they would be released. At that time I was still too young to truly understand what was going on there. I hadn’t even realized children were also detained at the base. After 9/11 I once again found myself having strong feelings for those who were being held at Guantánamo. For all we knew some detainees could have been wrongly accused and this legal loophole could leave innocent people suffering indefinitely. Because of these news stories I always thought of Guantánamo as an evil place. I never considered the uses of Guantánamo prior to the 1990s or that there might be other opinions or direct experiences of the base and what it meant to these people.

I was most surprised to learn of some of the views military family members had of the base. Anita Lewis Isom’s story of being a child living at Guantánamo was something completely unexpected for me. For the first time in my life I began to think of all the families of military personnel stationed at Guantánamo and what the site meant to them. I began to think of the soldiers stationed there and wonder what their experiences were. The Cuban workers at the base were also a demographic I had never before considered. I began to wonder what effect Guantánamo has had on Cubans as a whole and not just those once or still employed at the base.

Considering all of these different viewpoints made me begin to relate to all of these people on a personal level. A lot of the art work from Guantánamo depicts the artists’ experience on the base or their experience getting to the base. The second most prevalent topic is scenes from the artists’ home or homeland. The artist who created “Soldier’s Cat” chose not to depict an image of his home or family but rather his cat. “Soldier’s Cat” makes me think of the things I would miss most if I were stationed far from home just as the artist was. Obviously we’d all miss our friends and family, but we often don’t consider the everyday comforts of home that we would all long for. This image reminds me of the small things that make my home my home. This also makes me wonder what things could have made Guantánamo a home for the people who lived there. The image reminds me that there were Cuban workers that had to choose between their home country and their job at the base which provided them a means to feed and care for their families and also a way to afford some small comforts in their own lives.

I believe having insight to what Guantánamo has been used for and what it has meant to all people throughout its history is a positive step towards understanding what should and can be done with the site.

3 Comments to: Longing for Home

Mandy,
You are quite correct that there is an entirely different story to be portrayed about life in Gitmo from the perspective of those who lived there. My husband and I met there in 87, and were married in 88. We were stationed there from 87-90 (our oldest daughter was born there) and we returned from 92-94 when we were evacuated due to the Haitian and Cuban refugee/migrant crisis (the second time that American dependents were evacuated from the base – the first time was during the Cuban Missile Crisis in the 60’s – before my time!) I actually participated in this project (you can see a small blurb of my interview by searching my last name on here) If you would like to know more about life in Gitmo, please feel free to e-mail me!! I would LOVE to share my family’s story with you in further detail and give you the best understanding I can about life in Gitmo from the perspective of a base resident!! God Bless! Karen 🙂

Actually, the drawing was not done by the soldier. It was done by a Cuban rafter who had struck up a friendship with the soldier. The rafter did the drawing as a present for the soldier who was homesick and missed her cat. The soldier got reassigned and never got the drawing, so the rafter gave the drawing to Siro who was an ombudsman at the camps. He never found the soldier but maybe she will see this post and claim her drawing!!

Before reading your post I had fairly cynical opinion of ‘normal’ life on the base. While searching for photos online of the base I came across family portraits and even news articles from the base about kids in the school,. Overall these were depictions of a ‘home’ rather than a place of contentions. While looking through these photos Guantanamo Bay did not appear as GTMO, or even a military base, it looked like a community from anywhere within the United States. Heck, it could even be from a neighboring town in Minnesota!

As I said, I was rather cynical about these depictions of Guantanamo Bay because I felt what it actually depicted was a falsely constructed home. These family friendly images seemed so surreal in the context of the GTMO prison, that they somehow felt wrong. Now, this was a gut reaction and admittedly an opinion that lacked much rationale.

Your post has reminded that a home is not a set place, space, setting, or context. A home is in many ways just a memory. So even though Guantanamo Bay is a nightmare for some, there is every possibility that it can be remembered as a paradise, or even just a home, for others.