Difference between Enemy Combatants and Prisoners of War 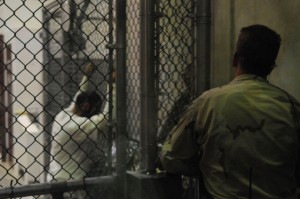 A man detained at Camp 6. Guantánamo, Cuba. Photo courtesy of Department of Defense.

After the Spanish-American War, in 1903 the U.S. leased Guantánamo Bay, 45 square miles, from Cuba. The U.S. used Guantánamo Bay as a naval station.  After the September 11, 2001 attack, the U.S. declared a “War on Terror.”  The war on terrorism was a worldwide effort. The main targets were Al-Qaeda and the Taliban.  The U.S. was able to detain some alleged members of Al-Qaeda and the Taliban during the War on Terror.

How do military personnel meet the definition of Prisoners of War?

A. Prisoners of war, in the sense of the present Convention, are persons belonging to one of the following categories, who have fallen into the power of the enemy:

1. Members of the armed forces of a Party to the conflict as well as members of militias or volunteer corps forming part of such armed forces.

2. Members of other militias and members of other volunteer corps, including those of organized resistance movements, belonging to a Party to the conflict and operating in or outside their own territory, even if this territory is occupied, provided that such militias or volunteer corps, including such organized resistance movements, fulfill the following conditions:

(a) That of being commanded by a person responsible for his subordinates;

(b) That of having a fixed distinctive sign recognizable at a distance;

(c) That of carrying arms openly;

(d) That of conducting their operations in accordance with the laws and customs of war.

3. Members of regular armed forces who profess allegiance to a government or an authority not recognized by the Detaining Power.

4. Persons who accompany the armed forces without actually being members thereof, such as civilian members of military aircraft crews, war correspondents, supply contractors, members of labor units or of services responsible for the welfare of the armed forces, provided that they have received authorization from the armed forces which they accompany, who shall provide them for that purpose with an identity card similar to the annexed model.

5. Members of crews, including masters, pilots and apprentices, of the merchant marine and the crews of civil aircraft of the Parties to the conflict, who do not benefit by more favorable treatment under any other provisions of international law.

One Comment to: Difference between Enemy Combatants and Prisoners of War

Teng – You bring up some significant questions that are extremely difficult to answer. First, I was surprised to learn the official definition of a Prisoner of War. I think many Americans, including myself, automatically assumed that these individuals detained at Guantanamo were POWs by nature of their perceived resistance. However, this line of thinking ignores the larger issues of the conflict. Mainly, that the U.S. did not formally declare war on a country or governmental body, but rather on acts of ‘terror’ as embodied by Al-Qaeda and the Taliban. And this fact differentiates the “War on Terror” from more traditional wars, which were the norm when the Geneva Convention took effect in 1950. But the international landscape has drastically changed in the last half century, and I believe that these standards of practice need to be seriously reconsidered. On the other hand, I also firmly believe the U.S. should treat these “enemy combatants” humanely, instead of exploiting an outdated regulation. They should be treated as POWs, because they would be considered as such if the Geneva Convention were updated accordingly. As for the use of Guanatanamo, I think right now it is a matter of convenience – a site with absolute military control and ambiguous legal status close to the continental U.S.. Beyond that, the issue becomes a matter of ethics, which I do not feel at all qualified to address besides the obvious assessment that these individuals should be protected by international laws. Nevertheless, it is important for us to keep asking the difficult questions and wrestling with the nuanced affairs surrounding Guantanamo in order to further our understanding of its historical significance.